The ongoing allure of Tolkien 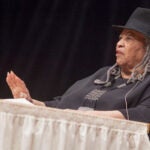 Harvard’s Stephen Mitchell, professor of Scandinavian folklore and a longtime fan of the fantasy author J.R.R. Tolkien, recently sat down with the Gazette’s Colleen Walsh to discuss some of the inspirations behind Tolkien’s 1937 classic “The Hobbit,” the prelude to the author’s “Lord of the Rings” trilogy, and a new major motion picture based on the early work.

GAZETTE: When did you first read “The Hobbit”?

MITCHELL: It must have been about 1965 or 1966 because I was no longer in elementary school. I am sure I was in high school, and the reason I remember that is because I played hooky for a day or two until I had read through it and the “Ring” trilogy. I pretended I was sick and stayed at home. I am of the generation that experienced [Tolkien’s books] in the hippie, West Coast, counterculture world. You know these buttons that are very popular from Newbury Comics that you see hipsters wearing nowadays? Those were so popular back in the ’60s, and one of them was “Frodo lives.” All of my copies of the Tolkien books have those wild purple psychedelic covers from the ’60s. I even ran across one in the attic the other day that had been taped and re-taped. The cover had fallen off.

GAZETTE: “The Hobbit” was published in 1937. Why do you think it has such lasting appeal?

MITCHELL: For most of us, don’t we somewhere deep down inside have the “You tore down paradise and put up a parking lot,” Joni Mitchell sort of reaction to modernity? You want things to be the way they once were. I know Tolkien had a similar experience in his own life, seeing the British midlands industrialized. There’s certainly a way in which the text appeals to people who want there to be, as Tolkien writes, “less noise and more green.” That is certainly something most people will relate to. I think there is a kind of rejection of modernity. I also think it really appeals to people because of the simple division between good and evil. There are some shades of gray in there, but for the most part the characters are fundamentally heroic or villainous, and there is something very appealing about that.

GAZETTE: What are some of Tolkien’s inspirations?

MITCHELL: Norse mythology plays a significant role, but people who know old Irish, Finnish, or middle-Welsh traditions also see inspirations there because Tolkien knew all of those materials. But certainly if you look through the Poetic Edda (Old Norse verse), you will see lots of names you recognize from “The Hobbit.” You have Fili and Kili and Gandalf and many others. Tolkien draws fairly heavily on Norse material and Norse folklore generally. Things like wraiths and trolls and giants certainly are connected, but so too are these other traditions.

GAZETTE: How do you think director Peter Jackson will treat “The Hobbit”?

MITCHELL: Tolkien’s legendarium, as he refers to it, is a creation that he works out based on his own life experiences, but also on a tremendous amount of knowledge about these older texts and literatures and languages. And so he is part of a continuum that goes back 1,000 years or more, and Peter Jackson is another iteration of that. It seems to me if you go to these movies and you want to see Tolkien and only Tolkien, then you are going to be disappointed. But if you go with the understanding that it’s a kind of moving stream, in the sense that it’s the same river but it’s always different somehow, then it’s likely to be pretty enjoyable. The fascinating thing for me is that there is so much richness in the trilogy. I couldn’t imagine how they could do it in six or seven hours. On the other hand I am really shocked that “The Hobbit” is apparently going to be as long.

GAZETTE: How do you think the filmmakers will accomplish that?

MITCHELL: Tolkien wrote some wonderful short stories. (“Leaf by Niggle,” for example, is a great story.) There are all kinds of anthologies of his non-“Hobbit” or “Ring”-related materials. He is really quite an extraordinary writer. My guess is they are going to add some of that in; why wouldn’t they? I think it will be fabulous.

GAZETTE: How do you view “The Hobbit” in relationship to “The Lord of the Rings”?

MITCHELL: I tend to view “The Hobbit” a little bit as an artist’s sketch. It’s an attempt to work out what he is going to do with the bigger canvas. “The Lord of the Rings” feels very much like a heroic epic — like legend. It leaves you kind of awed in some sense. “The Hobbit” feels more like a folktale to me. Things are tidied up here. Legends leave you with your jaw slightly dropped by it all. You can’t quite get over what’s going on, whereas with “The Hobbit,” God is in his heaven. We are all happy and cozy, things have worked out all right — except of course the story also has this wonderful ability to foreshadow that there is more to come from this ring that has been introduced into the world. There is the introduction of evil.

GAZETTE: Where does the word “hobbit” come from?

MITCHELL: I think you could probably start bar fights over this. There is, I believe, a heated debate about where the word comes from. The obvious answer is that it’s a combination of “human” and “rabbit,” a people-who-live-in-holes kind of thing. But as was pointed out years ago … there is a list of supernatural creatures from Yorkshire, and it does include the word “hobbit.” Scandinavians, for example, refer to the elves as the hidden or underworld people.

GAZETTE: Do you have a favorite character from “The Hobbit”?

MITCHELL: At the end of the day it seems trite to say, but I think my favorite is Bilbo himself, this fat little man who has success where others don’t. He is the common man, maybe even less than all the other people, who is able to rise and, somehow through his inherent goodness, defeat this monster, and be good in the face of lots of evil, and fundamentally do the right thing even if he has to behave in ways that might not be expected of him. He is shown, I think intentionally at the beginning, to be quite bumbling. He’s, after all, very fat and happy, living his little life, smoking his pipe. He has just finished up his umpteenth meal of the day, and then Gandalf appears, followed by all these dwarves crashing in, and off he goes on an adventure. And the adventure changes him as much as he changes the results of the adventure, which is part of what we look for in these types of texts.

GAZETTE: Much of the work you do is similar to that of Tolkien. What do you love most about it?

MITCHELL: I love working on what Tolkien loved working on, the older literatures and languages of northern Europe. And for me, languages are a wonderful tool that you need to get to some of these fun stories. To me there’s nothing more enjoyable than trying to take small data outliers, cultural points of information, and figure out what kind of patterns they represent. Somehow, lifting the words on the page up off the page and making them real — making us think about what they meant to the people who used them, wrote them, spoke them — that to me is pretty exciting stuff.