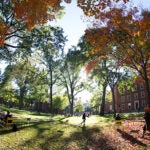 Deans’ Health and Life Sciences Challenge kicks off at i-lab

About 140 students packed Harvard’s i-lab in Allston Tuesday night for the kickoff of the Deans’ Health and Life Sciences Challenge, a $75,000 contest whose aim is to promote new ideas and innovative thinking in key health-related areas.

The attendees — including undergraduate and graduate students, postdoctoral fellows, and community members — came from a variety of backgrounds, from science to public health to business, but had one thing in common: new ideas and an entrepreneurial spirit.

Will Adams, a graduate student at the School of Engineering and Applied Sciences, has spent the past several years coaxing stem cells to differentiate into the cells that line blood vessels, called the vascular endothelium. Adams attended the event to look for partners who could complement his expertise and help translate his ideas into working therapies for diseases such as atherosclerosis, or hardening of the arteries. Adams pointed out that the gathering brought together people from fields that don’t often mix: science and business.

“It should be interesting to see how those two groups get along, since they almost never meet otherwise,” Adams said.

The event followed on the November announcement of the program, which promises a total of $150,000 in challenge prizes in two major areas. In addition to health and life sciences, a similar challenge in the arts, the Deans’ Cultural Entrepreneurship Challenge, launched Dec. 6 with a performance by cellist Yo-Yo Ma. The challenges are supported by friends and alumni of Harvard University and the Office of the President.

On Tuesday, Richard Lee, a scientist and clinician, kicked off the challenge with a thought-provoking talk about the hurdles of commercializing advances developed in his lab. After the formal part of the program, members of the audience were encouraged to mix and meet, and to form teams.

“None of you is smart enough to do this on your own,” said Lee, a professor at Harvard Medical School and Brigham and Women’s Hospital and affiliate of the Harvard Stem Cell Institute. “There’s a long road. There’s a lot of work ahead, and you need teamwork to get things done.”

The students have almost four months to formulate their proposals, which are due March 3. Finalists — judges will select up to eight — will receive $5,000 grants to further develop their ideas. In late May, a grand prize winner and up to three runners-up will share the $75,000 prize.

The challenge is intended to stimulate and support new ideas to improve health around the world. Ideas are being sought in four categories: redesigning health delivery; changing behavior to improve health; furthering stem cell biology and regenerative medicine; and developing computation and data analysis for new therapies, personalized medicine, and public health.

In his talk, Lee outlined two significant advances in his lab and asked audience members to choose which one might be the best candidate for a million dollars in development funds. The first is a treatment to regrow cartilage. The body’s inability to regrow damaged cartilage is a major cause of arthritis, so a therapy that improves it has a lot of market potential. The second is a circulating factor in the blood that improves the heart health of laboratory mice, apparently turning back the clock and rejuvenating the heart itself.

To those who thought the cartilage treatment was most worthy of the development funding, Lee said that FDA approval remains a major impediment to marketing it. To those who selected the heart health factor, he pointed out that results were only in lab mice so far, so major hurdles remain.

There is no right answer to the question of where best to allocate the dollars, Lee said, but what’s important is for the budding entrepreneurs to look down the road for obstacles, of which there will be plenty, and seek ways around them.

“If you think you have a perfect plan, you probably haven’t talked to enough people,” Lee said.