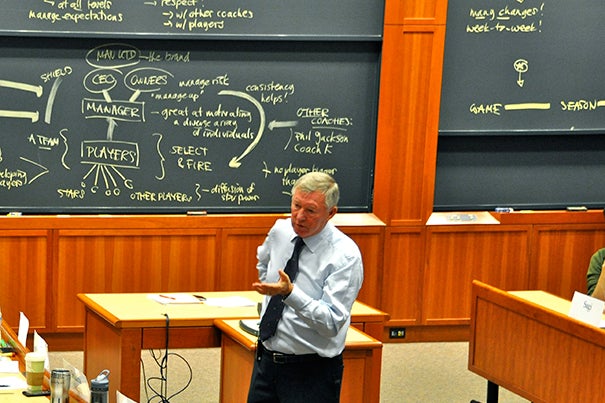 In the wake of Friday’s rampage in Newtown, Conn., during which 20 children and six staff members were killed at Sandy Hook Elementary School, Americans are searching for answers. It was the second-deadliest such shooting case in U.S. history.

“This is not how I wanted to be in demand,” Hemenway lamented Monday afternoon as the debate about gun violence was back in the spotlight. He spoke with Gazette staff writer Katie Koch about what he sees as an epidemic of firearms violence.

GAZETTE: You published “Private Guns, Public Health” six years ago. What were some of the most interesting or unexpected things you found at the time?

HEMENWAY: I think the most shocking thing is to compare ourselves to the other developed countries. People think we have a violence problem in the United States, but we really don’t. We’re an average country in terms of all the violence measures you can think of, in terms of crime. But where we’re very different is guns. We have lots more guns than anybody else, particularly handguns. A lot of countries have hunting rifles, but we have these handguns, and then we have these assault weapons. Secondly, we have by far the most permissive gun control laws, the weakest gun policies of any country. It’s not even close. Not surprisingly, we have more gun crime and more gun homicide.

We compared the United States to the other First World countries. We looked at both genders and all ages, but here are the statistics for 5- to 14-year-olds. A child in the United States compared to a child in Finland or France or New Zealand is not 20 percent more likely to be killed in a gun homicide, or 50 percent more likely, or twice as likely, or five times as likely. It’s 13 times higher.

Our gun suicide rate for these children is eight times higher. Our non-gun suicide rate is average. For unintentional gun deaths, we have 10 times the likelihood of death [compared with other developed countries]. These children are at risk. When you do surveys across states or cities or regions, you find that where there are more guns and more permissive gun laws, people are dying.

GAZETTE: You’ve done some research on the psychic costs of high rates of gun ownership in a community.  What does it show?

HEMENWAY: When we do our studies of inner-city kids, we find that a lot of them, maybe 5 percent of them, have carried guns, which is way too many. But when we ask them, “What kind of world would you want to live in: one where it’s easy, difficult, or impossible to get guns?” the huge majority want it to be impossible. Even the kids who have carried illegally want it to be impossible. But the reason they’re carrying is that other kids are carrying.

GAZETTE: Where do these horrific mass shootings come in?

HEMENWAY: We have more of these [than other countries], too. The interesting thing is, it seems like most of these are suicides. These are often people who aren’t criminals in the normal sense. They look more like suicidal people, and that’s what they are. In every one of these mass shootings, the person has either committed suicide or suicide-by-cop, or was immediately arrested and incarcerated forever. So the notion that you might, by arming other people, deter anything is crazy. For these people, this is their last basic act on earth.

GAZETTE: Why should we consider gun safety and gun control public health issues?

HEMENWAY: It’s a criminal justice issue, but it’s also much broader than that. It also has to do with public safety and health. Criminal justice basically focuses on the individual criminal and police. We say, what about social norms? Can doctors do anything? We have all this data from the medical care system where we can find out how many people are actually being wounded [by firearms] and in what circumstances. When we look at guns, we don’t just look at crime. We say, “OK, you have a gun in the house. It may or may not protect you against crime. It probably increases the likelihood that someone in the house will be murdered. But there are other things. It also increases the likelihood of suicide. It increases the likelihood of gun accidents. We can’t find any corresponding benefit from having a gun.”

I think also the public health approach is about getting lots of people together. It’s not just working within our little discipline. When public health is at its best, we’re pragmatists. We’re trying to figure out what women’s groups can do to add to this. What can the media do? What can advocates for children do? What can physicians do to add something to help reduce the problem [of gun violence]?

GAZETTE: Is it possible that we’ll see a shift in public attitudes on guns, the way we have over the years with, say, driving drunk or driving without a seatbelt?

HEMENWAY: I hope so. On the issue of changing social norms, one of the things we’re trying to do is get an 11th commandment of gun safety, similar to “Friends don’t let friends drive drunk.” Friends don’t let friends who are going through a really rough patch have access to a gun. If your 17-year-old is showing signs that something is wrong, and his girlfriend breaks up with him, and he’s getting a bad report card, don’t leave your gun around. Just get the gun out of the house for a few months or a year.

You just want to get the gun away. It’s more of a social thing than a law. And this is a good society; this is what we do. We care about each other.

I think this mass shooting could have been avoided if there had not been guns in the home.

GAZETTE: Do you see a component of public awareness being part of the approach to decreasing gun violence?

HEMENWAY: In public health, you try everything. I think we’d be better off for suicides if we have a five-day waiting period for buying a gun. We wouldn’t solve the suicide problem, but we’d reduce suicides by about 3 percent.

GAZETTE: What are the next steps to take to reduce gun violence when we already own nearly 300 million guns?

HEMENWAY: It may sound hard, but it’s not like we have to throw up our hands. In Boston, how do inner-city gang members get guns? They weren’t born with them. Their parents didn’t have them. They can’t burglarize houses and find many guns. The answer is, adults bring guns into the inner city and sell them, from western Mass., from New Hampshire and Vermont, from down South, where it’s easier to get guns. We just have to figure out a way to stop the trafficking, so that rather than always pointing at the individual who did something wrong — which typically doesn’t help anything — we can figure out a way to make it hard to behave inappropriately, rather than easy. When it’s easy to behave inappropriately, people will.

GAZETTE: How do debates about gun control and about access to mental health services intersect following an incident like this?

HEMENWAY: I’m not a mental health expert, but there’s no question: For such a rich country, we spend our money on such bizarre things. We should be spending more money on better mental health services for lots of people. But in most of these shootings, people gave a lot of warning signs. We should be able to see those and say, “Let’s save that person,” not just the other people. Let’s save the suicidal person. If we had better mental health services, we’d reduce homicides of women. A lot of women get murdered when a husband goes berserk and kills his wife and then himself. That’s what a lot of these [shootings] are: suicides where someone goes out in a blaze of glory.

But they all have guns. It’s so incredible that on the same day we had this horrific shooting in an elementary school, a guy in China [wielding a knife] tried to kill lots of elementary school students. And nobody died. Why? Because they have fewer mental health problems? No. It’s the access to guns. Guns make interactions much more lethal.

GAZETTE: Have you seen things change since the publication of your book six years ago? Have any of your recommendations come to pass?

HEMENWAY: Things have gotten better in California. Most of the United States has gone backward. We’re saying, “Let’s get more and more guns; let’s arm everybody.” I think that’s a recipe for disaster.

GAZETTE: If you could take one action to reduce gun deaths tomorrow, if the political will were there, what would it be?

HEMENWAY: I think the one thing that would help a lot is universal background checks. It’s not that hard. We know states do that. California does it; Massachusetts does it. I think it would actually help people in Massachusetts if other states did it, because right now our criminals get their guns from other states.