Girls who rock out 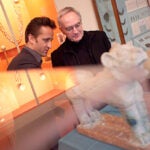 “She likes death metal and bunnies at the same time.”

That’s how Laura’s friend describes her in the documentary “Girls Rock!,” which follows a group of 8- to 17-year-old girls who convene for a week during the summer of 2006 in Portland, Ore., for Girls Rock Camp. There, they make new friends, freak out, and create music in bands with names like Neon Dumpster, the Juicy Tanglers, and P.L.A.I.D. (People Lying Around in Dirt).

Laura, about 14 at the time, is wonderfully imaginative, a bit misunderstood, but finds acceptance at the camp — not just with her peers but within herself. “I’m awesome!” she declares by the end of the film.

The experiences captured within “Girls Rock!” have helped to grow the Girls Rock Camp phenomenon to a network of 40 affiliated camps around the world since its founding in Portland in 2001.

Nora Allen-Wiles, Hilken Mancini, and Mary Lou Lord founded the Boston chapter two years ago. That summer, 40 girls registered for the camp, held in Boston’s Jamaica Plain neighborhood, and kicked off its rapid-fire popularity. Now the camp is a full-fledged 501(c)(3) nonprofit. There are two summer sessions for girls, and even a Ladies Rock Camp for women — because you’re never too old to rock.

Mancini and Allen-Wiles spoke about the rock ’n’ roll camp during movie night at Radcliffe’s Schlesinger Library on Wednesday evening following a screening of “Girls Rock!” (The theme of this year’s film series is “ages of women.”) The two met while volunteering at the Portland chapter, and bonded after discovering their shared Massachusetts roots.

“We vowed that week that we’d start a girl’s rock camp in Boston,” recalled Mancini, a guitarist for such bands as Fuzzy, Shepherdess, and now The Monsieurs (the drummer of which is a Ladies Rock Camp graduate).

“Campers form a band on the first day,” explained Allen-Wiles. “They have instrument instruction every morning and band practice in the afternoon, punctuated by self-esteem exercises.”

No prior musical instruction is required. At the end of the weeklong session, a concert showcase is held for parents and friends.

“One of the biggest misconceptions about the rock camp is about the showcase. People always ask, ‘How do you decide who wins?’ But there’s absolutely no competitive atmosphere,” said Allen-Wiles.

“Our camp is far more based in self-esteem than in musical or technical instruction,” stressed Mancini. “You don’t need to know how to play an instrument at all when you’re coming in. It’s more about finding a space for girls to find their voice, make a lot of noise, not be afraid, to scream and sweat, and be ugly and be funny, and feel safe in that space. And that’s what it’s there for, because rarely are girls encouraged to do that, and rarely do they see 40 women surrounding them doing the same thing. So we need to give them this, and we need to do this in our society.”

Mancini owns 40 South St., a vintage store in Jamaica Plain whose back room doubles as headquarters for Girls Rock Camp. She and Allen-Wiles are now full-time directors, coordinating volunteers, programming initiatives such as self-defense courses and punk rock aerobics, inking partnerships with music shops, and lining up noteworthy Boston-based musician volunteers, such as Juliana Hatfield and Tanya Donnelly.

Lilia Halpern-Smith, a two-time volunteer, Rock Camp alumna, and assistant director of Harvard’s Center for American Political Studies, said that working at the camp was endlessly inspirational. “It’s always thrilling to see the camper who doesn’t talk — but who wants to sing — get up onstage and belt it out,” she said.

“It’s all about keeping girls from shrinking inside themselves,” echoed Allen-Wiles.

“The girls’ lives really do change,” Mancini said. “When we have our camper surveys at the end, a lot of them say … ‘I found the less-shy person inside of myself, and I’m not afraid of bringing that person out.’ And that’s why we do what we do.”

Movie night at the Schlesinger Library returns on Feb. 6.