When jazz was king 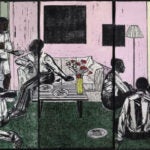 The art of the possible

Panel examines the music’s past, present, and future

In an event sponsored by the Harvard Jazz Bands and the Office for the Arts’ Learning From Performers series, radio personalities Eric Jackson and Steve Schwartz, along with concert promoter Fred Taylor, explored their shared passion for the music.

For almost 30 years, Schwartz and Jackson hosted weekly jazz radio programs on Boston’s WGBH radio. This past June, despite a bitter reaction from some fans, the station bumped Jackson’s show to the weekends and dropped Schwartz from its lineup to make way for news.

Discussing the current state of the music, the panelists mourned the loss of jazz programming on local radio outlets. Jackson said that although younger generations are interested and eager to hear jazz, eliminating such programming means losing a critical avenue into the music.

“To me, that is so important, to have people learn about this music when they hear it on the radio,” Jackson said. When it’s pulled in favor of other programming, “that’s major; that threatens the future health of this music.” With an iPod, you only listen to what you upload, explained Jackson. But “radio offers a wonderful world of discovery.”

Jackson advocated more outdoor venues. He said jazz musicians who play in indoor clubs are “preaching to the converted.” Performing jazz outside offers people chance encounters, exposing them to genres that they might not even have known they would like. “That’s a way of bringing the music to the people. In one sense, radio did that same kind of thing.”

Jackson’s senses opened when he was hired at WBCN, a pioneering alternative Boston radio station, in the 1970s. The station asked him “to do a 60 percent jazz show, with a heavy emphasis on black music, but play some white music too,” said Jackson. The experience was trying. Other announcers wondered exactly why he was there. But it was also rewarding. It exposed him to a variety of musical styles as well as to live performers, through another role as host of weekly live jazz broadcasts. “It was a great educational experience.”

Live broadcasts are critical, agreed Schwartz, who regularly invited young jazz artists to the studio to perform during his broadcasting days. Schwartz, who fell for jazz when he and his wife saw saxophonist John Coltrane in 1964, said those sessions gave aspiring artists exposure, and in turn they gave “listeners something that they didn’t know they needed until they heard it. That’s really being missed.”

One of Schwartz’s most memorable moments came in a radio interview with jazz giant Benny Carter. The saxophonist had just arrived from Spain and was weary and “didn’t want to be there.” But as the interview went on and Carter slowly realized Schwartz knew his material cold, things warmed up.

“At the end,” said Schwartz, “he thanked me for having such a good time, and that made me feel really, really good, because I was very intimidated.”

Taylor, a concert promoter and producer, as well as owner and operator of the Jazz Workshop, a jazz club hot spot in Boston in the 1970s, entertained the crowd with anecdotes involving jazz greats such as trumpeter Miles Davis and pianist Dave Brubeck. Taylor recounted taking a new recorder to a session in 1956 at a Boston venue to capture Brubeck and his trio.

“I just kind of looked for the sweet spot” to record the set, said Taylor. After Brubeck listened to the recording, he loved what he heard so much he paid Taylor $150 for the rights so his record company could release it. The New York Times gave the resulting record raves as “one of the best new recordings, done on amateur equipment, achieving natural balance.”

Davis could be dismissive at the best of times, said Taylor. He said there was even something called the “Miles Davis doll: You wind it up, and it turns its back on you.” But the irascible trumpeter also was a perfectionist who appreciated honesty. When Davis asked Taylor what he thought of the band after its first night of a stint at the Jazz Workshop, Taylor said the band had been good but would sound better in a couple of days once the players became more familiar with the venue and each other. Davis responded, “You know, you’re right.”

Taylor agreed that the local jazz scene has changed. While the big jazz clubs in Boston have dwindled, he said, there has also been an explosion of smaller, local clubs in its suburbs. “Jazz is alive … there is, thank God, a lot of real local activity,” he said, adding that smaller venues offer up-and-coming artists a chance to hone their talents. “That can never be replaced, the ability to have a live rehearsal onstage.”

The event was part of a two-day celebration honoring the three ‘”jazz heroes.” On Friday, the Harvard Jazz Bands, with guest conductor and artist Don Braden ’85, performed a tribute concert to the three at Lowell Hall.