Poetry in the making 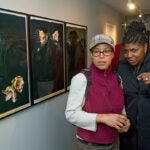 Creating a whole from fragments

Professor is bringing sijo, a Korean literary form, into forefront

Forget “Gangnam Style,” the bigger-than-life song sensation that swept in from South Korea. David McCann is rather big in Korea too. Not for his dancing or his audacious music videos, but for his lyrics, yes. And for his music.

At a recent PEN International conference in South Korea, McCann, the Korea Foundation Professor of Korean Literature, pulled out his ukulele and sang a sijo, a Korean poem, to a standing ovation.

McCann had re-arrived. Renowned in Korea as an authority on sijo (shee-jo), a poetic form often compared with Japanese haiku, McCann’s portrait can be seen flashing from the cover of “Literature and Thought,” a monthly Korean publication.

“Am I a celebrity there?” McCann pondered. “I wouldn’t say that. But in some literary circles, I am.”

Sijo builds on what haiku starts. Similarly constructed from three lines, sijo lines have four parts allowing for additional syllabic legroom, instead of haiku’s rigid five-seven-five syllabic structure. Sijo writers get 43 to 45 syllables to play with, so long as the third line contains a twist, a point of dramatic change.

Sijo’s roots go back to the 1300s, “and it was up until the 20th century that it was mostly composed and sung, not written and published,” McCann said. The industrial era ushered in publishing as a primary outlet for sijo writers. But one of the things that McCann is most interested in is reconnecting contemporary sijo to performance, “but not necessarily the old Korean-style performance.”

“I don’t play it well, but it’s a very friendly instrument,” said McCann. “But because sijo is a four-part line, it fits into other forms of music that have four parts, like blues or bossa nova.”

David McCann sings “Azaleas,” a poem by Sowol Kim (1902-1934). The poem was titled “Folksong Poem” when first published in Kaebyôk magazine in 1923. McCann pairs the poem with his ukulele rendition of the traditional song “Barbara Allen.”

McCann started writing poetry in his 10th-grade English class at Newton High School, but it wasn’t until the mid-1960s, when he was a volunteer in the Peace Corps and living in Korea, that he tapped into his life’s calling by fortuitously picking up a book by the poet Sowol Kim.

“Everyone knew this poet; he was kind of like the Robert Frost of Korea,” recalled McCann, who began devouring and delighting in Kim’s verse. Whenever he’d travel around and have questions, he’d break the ice with strangers by referencing Kim’s poetry.

McCann’s book “Urban Temple: Sijo, Twisted & Straight,” his fourth book of poems, was born in his “Writing Asian Poetry” class. “Everybody who’d gone to school in the U.S. remembered having a haiku day in fourth grade. So, why not a sijo day? That got me thinking, and I wound up writing my first sijo in English at Charlie’s Kitchen, in Harvard Square. Took out a napkin and wrote on it.” The book has been translated into Korean and was published in September.

On sabbatical this semester, McCann is sijo’s missionary man. He has plans to lead a sijo workshop at Mount Holyoke College and this month will visit Chicago’s Poetry Foundation to deliver a talk on sijo in the series “Poetry off the Shelf.” He also attended the Colrain Poetry Manuscript Workshop, where he picked up some valuable pointers on his second collection of sijo, titled “Same Bird.”

The release of his second poetry collection in South Korea is expected to draw attention. In the United States, where poetry is largely undervalued, McCann is slowly but steadily spreading the sijo word. He is the lead judge of a sijo contest each year for young writers, and the winners are published in the journal Azalea, which McCann edits and which is published through the Korea Institute and distributed by the University of Hawai’i Press.

“Poetry is very significant in Korea. People pay a lot of attention to it, and they know something about the traditional past as well as the modern and contemporary poets,” said McCann.

“In the U.S., maybe we pay attention to verse through pop songs, but poetry doesn’t seem to have the same resonance here that it does in Korea. Who knows?  Maybe a sijo wave could help change that.”