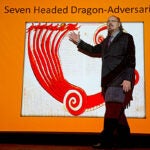 Kushner, Faust discuss the man and the film at Harvard screening

The friendship between President Drew Faust and “Lincoln” screenwriter Tony Kushner dates to the spring of 2008, when Kushner came to campus to deliver the annual Tanner Lectures on Human Values.

“I remember a wonderful dinner where we talked about Lincoln the whole time,” Faust, a renowned Civil War historian, said Thursday. “I think the other people at the table thought, ‘What is going on? Could they please be a little more polite?’”

The two Lincoln enthusiasts sat down again, at the Brattle Theatre, for a conversation about the beloved and mysterious president, following a Harvard-sponsored screening of Kushner and director Steven Spielberg’s new biopic. (This time, there were no dinner guests to offend.)

When he first met Faust, Kushner recalled, he was already more than a year into the difficult process of adapting a massive Lincoln biography (Doris Kearns Goodwin’s “Team of Rivals”) for the big screen. By the winter of 2007, he had told director Steven Spielberg — also his collaborator on 2005’s “Munich” — that he might have to give up. Then the writers’ strike hit Hollywood.

“I had to stop working on [the script], which was exactly what I needed to do,” Kushner said. “I just put it away and freaked out about the Tanner Lectures instead.”

After deciding to narrow his focus to the last four months of Lincoln’s life, Kushner presented Spielberg with a 500-page doorstop (the typical feature-length screenplay, by contrast, clocks in at 100 to 120 pages). To Kushner’s surprise, Spielberg liked the draft’s first act: the less action-packed story of the passage of the 13th Amendment, which abolished slavery, through Congress.

Spielberg had his doubts as well.

“The whole movie was just going to be a lot of guys talking, and he said, ‘I have no idea how to film that,’” Kushner said. “What I love about Steven is he still wants to scare himself and do things that nobody knows how to do, and I think that’s the mark of a true artist.”

Ultimately, the film intimately details Lincoln’s struggle: Does he end the war as expeditiously as possible, as his advisers and his fraught wife, Mary (Sally Field), are urging, or does he hold out for the passage of the amendment, which will surely lose traction as soon as peace is achieved?

The movie trades the sweep of battlefields and Southern plantation life for the cramped quarters of Lincoln’s cabinet and the chambers of squabbling lawmakers.

“We were telling the story of a bunch of white guys … who for the most part had no direct experience of slavery,” Kushner said of the Northern congressmen who fought to end slavery. “We didn’t want to do a god’s-eye view of showing the audience what these people didn’t know. Part of the astonishing political miracle of the passing of the 13th Amendment is that it was done by people who in certain ways didn’t even know what they were doing. They had a rough sense of where the country needed to go and did the right thing.”

Then there was the challenge of capturing Lincoln the man — an enormous one, not just for his historical significance and mythic stature in American life, but for his irreconcilable, mysterious personality. In his time, Kushner said, the president was adored and admired, considered an empathetic leader and first-rate listener. At the same time, those closest to him also found him cold, removed, and manipulative.

“The wonderful thing about being a playwright or a screenwriter is that you only have to partially do it,” Kushner said. “You create the opportunity for a really great actor to step in and do the rest.” (In this case, he added, he was lucky to have Daniel Day-Lewis in the role: “There’s something metaphysical about him,” Kushner said.)

Kushner recalled reading an account of Lincoln taking Tad, his youngest, and favorite, child, into the battlefield at Richmond on his son’s 12th birthday, over the warnings of his generals.

“Lincoln’s response was, ‘I can’t leave him behind; it would break his heart’ — which is kind of touching and also nuts,” said Kushner, who faithfully portrayed Tad (Gulliver McGrath) in the film as a rambunctious hellion given free rein over the White House and his father’s attentions. “The way that he raised Tad, just letting him do his own thing, is both lovely and also severely neglectful.”

In recent decades, the “great man” theory of history has faced well-deserved criticism from historians, said Faust. In a time when academics concern themselves more with broad social forces than presidents and generals, a movie like “Lincoln” — in addition to being a “tribute to compromise” — can serve as a reminder that in a few extraordinary cases, visionaries like Lincoln really have changed the world and shaped the historical record.

“I always felt Lincoln was the complete counterweight to any denial that an individual can make a difference,” she said.