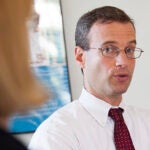 Thomas K. McCraw Sr., a renowned and much-honored Harvard Business School (HBS) historian, teacher, and author, who won a Pulitzer Prize in 1985 for his book “Prophets of Regulation,” died Nov. 3 at Mount Auburn Hospital in Cambridge, Mass., after a long illness. He was 72.

McCraw, who played an important role in making business history more influential and accessible in the broader fields of history and management, retired from the active HBS faculty in 2006. At the time of his death, he was the School’s Isidor Straus Professor of Business History Emeritus. He was also the former editor of the Business History Review, a quarterly journal of research published by Harvard Business School.

“Tom McCraw was an extraordinarily insightful and influential historian who won acclaim both on this campus and around the globe,” said HBS Dean Nitin Nohria. “His work will influence students and scholars for generations to come. Tom was the personification of the phrase ‘a scholar and a gentleman,’ and he will be greatly missed by everyone who knew him at Harvard Business School as a friend, colleague, or teacher.”

McCraw joined the HBS faculty as a visiting associate professor in 1976, when he became a colleague and protégé of the late Professor Alfred D. Chandler Jr., the great historian of American and global big businesses and organizations. Chandler was recruiting a group of young historians, including Richard S. Tedlow, now the School’s Class of 1949 Professor of Business Administration Emeritus, and Richard H.K. Vietor, the Paul Whiton Cherington Professor of Business Administration, to make HBS the center of research in business history.

The group also became known for its excellence and innovations in the classroom, including the creation of a required first-year M.B.A. course “Creating Modern Capitalism,” an effort McCraw led and for which he edited an accompanying case book (published in 1997) titled “Creating Modern Capitalism: How Entrepreneurs, Companies, and Countries Triumphed in Three Industrial Revolutions.”

According to Geoffrey G. Jones, the current incumbent of the Straus professorship and faculty chair of the School’s Business History Initiative, “Tom was a true leader and institution builder, who strove courageously and selflessly to create and sustain the big picture. A prolific and lucid author, he repeatedly made the case that history matters to the concerns of today. He was a master of using biography to deepen understanding of highly complex issues, but he was also a remarkable synthesizer, a skill he employed to pioneer the teaching of global business history in the 1990s. Charismatic, brilliant, and generous, Tom inspired generations of colleagues and students. In that regard, I speak from personal experience as well. He recruited me to join the HBS faculty from my university position in England. He was my mentor and my role model, and I will miss him terribly.”

In his early work, McCraw combined his knowledge of history and public policy to provide a long-term perspective on issues raised by business and government relations. In an influential series of books and articles, he analyzed the rise of economic regulation in the United States in the past two centuries and explored how government policies affected competitiveness.

As McCraw saw it, “Too much government regulation can kill a company, an industry, and even a national economy — but so can too little. Successful capitalism requires the persistent encouragement of private entrepreneurship, but also constant public monitoring to ensure that the system does not spin out of control.”

He believed that a “foundational truth about capitalism is that no industry can regulate itself. The pressures for innovation and profit are simply too great — and never more so than in the present era of global capitalism.”

McCraw’s most recent book, “The Founders and Finance: How Hamilton, Gallatin, and Other Immigrants Forged a New Economy,” was published just a few weeks ago by Harvard University Press. This volume is the first to tell the story of how several foreign-born financial specialists, including Alexander Hamilton, the first U.S. secretary of the treasury, solved the fiscal crisis facing the newly created United States of America after the Revolution, when the new country was bankrupt and without the power to tax.

At the time of his death, McCraw was preparing to write another book that he planned to publish in 2015, covering 10 industries and important entrepreneurs who had come to the United States from other lands.

McCraw was born Sept. 11, 1940, in Corinth, Miss. The son of an engineer for the Tennessee Valley Authority (TVA), he grew up near several dam and power plant construction sites in Alabama, Kentucky, and Tennessee. Witnessing firsthand the people, events, and places that shaped the history of the TVA — one of the broadest reform programs of President Franklin D. Roosevelt’s New Deal — influenced McCraw’s decision to study business history.

McCraw began his academic career as a professor in the history department at the University of Texas, Austin, but came to Harvard Business School in 1973-74 on a Harvard-Newcomen Fellowship in Business History. He returned in 1976 for a two-year appointment as a visiting associate professor and was named a full professor with tenure in 1978. He became the Straus professor in 1989.

McCraw is survived by his wife of 50 years, Susan (Morehead) of Belmont, Mass.; two children, Elizabeth McCarron of Wellesley, Mass., and Thomas Jr., of Bedford, N.H.; three grandchildren; and a brother, John C. McCraw of Gainesville, Fla. Another daughter, Carey, predeceased him in 1970.

In lieu of flowers, donations in McCraw’s memory can be sent to the Belmont Library Foundation, P.O. Box 125, Belmont, MA 02478.

To read the full obituary.