Exorcising the curse of knowledge 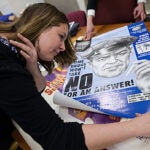 Explaining how to write well, Pinker says to think about your readers

On a snowy, windy evening the day after the election, author Steven Pinker told a packed audience at Sever Hall exactly what’s wrong with so much academic writing: It’s filled with abstract language, clunky transitions, clichés, “zombie nouns,” and “compulsive hedging,” signified by words like “somewhat, comparatively, and to a certain degree.”

In Wednesday’s hourlong talk, “The Sense of Style: Writing Instruction for the 21st Century,” part of the “Harvard Writers at Work Lecture Series,” Pinker also bemoaned the tendency of academics to “write down” to their readers, using what he called “motherese,” the grating, I-know-best tone that a mother might use to explain something to a 6-year-old.

“You don’t need abstract language simply because the concept is difficult,” Pinker said, citing best-selling science writers like Richard Dawkins, who’ve succeeded in making complex ideas such as evolution accessible to lay readers. (The modest Pinker, author of “The Better Angels of Our Nature” and “The Language Instinct,” could have easily cited himself.)

Pinker, the Johnstone Family Professor of Psychology and Harvard College Professor, blamed the problem of excessive hedging on a perceived need by academics to “CYA,” which he gently translated as “cover your anatomy,” to the audience’s chuckles. The remedy? “You can count on the common sense of readers to fill in the missing hedges and apologies.”

While exploring an array of writing “don’ts,” Pinker also debunked some classic writing advice from Strunk and White’s “The Elements of Style.” He described the popular style guide as “often baffling,” as when it assaults the verb “to contact” as “vague and self-important.” Pinker defended the verb as perfectly acceptable in the age of email and social media. He also pointed out several of Strunk and White’s “self-contradictions” and “inept guidance,” as when they attack the passive voice. “The passive voice is usually a better construction” than the active voice, said Pinker, “when the affected entity ought to come earlier [in the sentence] or when the agent of the action is irrelevant.” It has its place, Pinker said. “Otherwise, why would it exist?”

Pinker believes “we can [write] better today, by using the science of language” to understand how to better engage readers. He advocated a “classic style” that puts the needs of readers first, with “the goal to help the reader see reality” through a more concrete and “conversational style.” In the classic style, Pinker explained, “the writer points to things in the world the reader can see,” rather than building abstraction atop abstraction. The writer has, most of all, “an obligation to see through the [written] words to see what they represent.” If writers don’t understand their deeper meaning, readers have no chance.

Why is it so difficult to write well? Pinker described the primary culprit as “the curse of knowledge,” which he defined as “the failure to understand that other people don’t know what we know.” Pinker recommended a few methods to “exorcise” this curse, including “remember it as a handicap to overcome” and “show a draft [of your writing] to a representative reader” to see if it’s comprehensible. If it’s not, revise for clarity.

Pinker made a final suggestion to those seeking to improve their writing. Take a piece of writing (a book, an article, etc.) that you deem exemplary and “re-engineer it,” meticulously examining its component parts in order to understand exactly how the writer constructed it. Writing is an all-important skill, said Pinker, one “many people consider the signature accomplishment of a university education,” and we can do it better.

Responses from the audience were enthusiastic. Harvard freshman proctor Josh Bookin described Pinker’s talk as “a thoughtful and thought-provoking look at why and how we write.” Harvard freshman Tyler Jankauskas appreciated both Pinker’s primary focus on readers and how “he reinforced the need for writers to be concise and clear.” Jankauskas particularly appreciated Pinker’s recommendation to resist “using highfaluting language” simply to impress others. Harvard senior Chenglin Yuan echoed the sentiment, saying, “I liked Pinker’s idea of approaching writing as a way to help the reader. Many people seem to write for themselves, not with readers in mind.”

If Strunk and White have earned legendary status for their classic commands (“omit needless words”; “place the emphatic words of a sentence at the end”), Pinker has added a few more, updated for the 21st century, urging writers to work tirelessly against “the curse of knowledge” and to avoid the sort of excessive abstraction that causes readers to scratch their heads.