Creating a whole from fragments 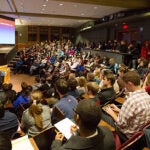 Exorcising the curse of knowledge

In the hands of artist Maria Magdalena Campos-Pons, a few photographic works prove powerful enough to make a profound statement about family and the Afro-Latin experience in America.

“I tried to talk about the nuances of construction of the family. I’ve always been curious about the dichotomy, almost the opposing sides — black/white, Cuba/America, Africa/Europe — and then the result, the hybrid surge element,” said Campos-Pons, whose exhibit “Something About Family” opened Thursday at the Neil L. & Angelica Zander Rudenstine Gallery in the W.E.B. Du Bois Institute for African and African American Research.

“I’ve been using diptychs and triptychs to comment on the idea of fragments and how we make a whole. It’s almost like we take particles of identity to create this new one,” she said.

Campos-Pons is an interdisciplinary artist, but the exhibit focuses on a selection of 20-by-24-inch Polaroid Polacolors, a medium she chose for its “lusciousness.” They are not photojournalistic works meant to freeze a telling moment, however, but deliberate compositions that were planned, sketched, and carefully arranged in advance.

And they’re haunting. “Family Still Life” is a triptych of pale, slender bottles capturing “the little noises, the moment of stillness in the family, the moment of beauty, love, sorrow, joy … the sacred stories told within the walls,” said Campos-Pons. “A bottle carries so much silent information within — it’s the air that everybody breathes, the noises the air carries.”

Another triptych, “Sagrada Familia,” pays homage to Campos-Pons’ son and to her husband; their pictures, she said, reflect the “trilogy of relations,” with mother and father at the center. “Study for December 17” celebrates a Yoruba holiday honoring a god that her late father worshipped in Cuba.

Poignantly, “Unspeakable Sorrow,” a trio of women covered in black, their faces hidden from the lens, addresses women responding to and trying to make sense of tragedy. Campos-Pons created the work after the death of her mother, and it had special meaning for her at the opening on Thursday. Her father-in-law, Neil Leonard II, had died the day before. The show, which Campos-Pons called “an opportunity to reflect about where you’ve been and where you’re headed,” is dedicated to him.

Campos-Pons was born and raised in Cuba, and came to the United States in 1988 to study at the Massachusetts College of Art. She now teaches painting at the School of the Museum of Fine Arts in Boston. She has had solo shows at the Museum of Modern Art in New York, the Venice Biennale, the Johannesburg Biennial, the First Liverpool Biennial, the Dak’Art Biennial in Senegal, and the Guangzhou Triennial in China, and she was the first artist to exhibit at the Rudenstine Gallery, in 2006.

Dell M. Hamilton of the Du Bois Institute, who studied with Campos-Pons at the School of the Museum of Fine Arts, said her work addressed issues of longing, exile, and belonging, and called her a model of the African-Latin experience.

“That immigrant’s feeling of looking backwards and forwards — I think that’s what Magda is doing in her work,” said Hamilton, the American-born daughter of Honduran parents. “That’s part of the challenge, what her work is trying to bring into the conversation. How Afro-Latins make a life for themselves here in the U.S. is a question scholars are still trying to figure out.”

“Something About Family” was curated by Portia Harcus and was co-sponsored by the Du Bois Institute and the David Rockefeller Center for Latin American Studies. It will be on display through May.