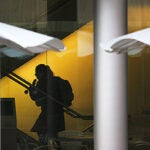 With a mere 22 days left in the Mayan calendar — pinpointing our worldly demise on Dec. 21 — we should all be getting things straight in our own lives, cautions David Carrasco. He is, of course, being tongue-in-cheek.

In Carrasco’s Wednesday night lecture at the Peabody Museum titled “Apocalypse Soon? How the World Ends (or Doesn’t) in Religions of the World,” the Neil L. Rudenstine Professor of the Study of Latin America discussed the historical origins of humankind’s periodic preoccupations with the apocalypse.

Culling from Mesoamerican cosmology, the Bible’s Book of Revelation, and the notion of mappo — a cosmic cycle in Buddhism that forewarns of the decline of Buddha’s teachings and social unrest — Carrasco said that “concerns and fears of the end of the time, or apocalypse, have for some time been a widespread, ever-present concern among human beings, and not only in the Western world.”

The latest in apocalyptic fashion? The Mayan calendar. And while those Mayans were certainly up to something, “there’s no evidence” of apocalypse in that culture’s writings, said Carrasco, or that Dec. 21, 2012, will be anything more than just another day.

“All the scholars say no, but there are more than 1,500 books claiming the Maya predicted this apocalypse,” he said.

Carrasco outlined patterns in apocalyptic predictions, beginning with the arrival of a message — typically delivered via vision or dream and given to someone who then becomes identified as a prophet — that speaks of an imminent, universal transformation.

“There’s an urgency, a totality, and the sense that the message has come from another level of reality to us,” he said.

These communications are frequently numbers-driven — the seven-headed dragon in the Book of Revelation, for example — and often predict catastrophe followed by a golden age, or a period of travail before a final liberation.

But some version of an apocalypse, he said, has always been present somewhere, for someone, though the threat can take various forms beyond the end of the earth. The versions can be local, even cultural.

“In 1922, a typhoon hit China, killing more than 50,000 people. In 1892, the Sierra Club was formed by John Muir in San Francisco for the conservation of nature, and a mine explosion killed 100 people in Krebs, Oklahoma, and black people trying to rescue white survivors were driven away with guns. And President [Harry] Truman revived his ratings with a State of the Union speech focused on the claim that America was in its greatest peril from Communist aggressions all around the world,” he said.

“These apocalyptic fears about nature, race, and the economy were always with us.”

Though bothered by the amount of misinformation that goes hand in hand with apocalyptic fearmongering, Carrasco was recently inspired to transform this pessimism into something useful.

This month he published “Mysteries of the Maya Calendar Museum,” a children’s book co-authored with his daughter Laanna that teaches children the truth about the calendar and the apocalyptic prediction.

He even expressed a bit of empathy with those who may fear the worst in the wake of a spree of weather-related catastrophes. “We can all identify to some extent with the natural disasters of Hurricane Sandy and its impact on our consciousness, the tsunami that hit the Japanese islands, and Katrina,” he said.

But if stocking up on canned goods in your underground bunker is your thing, you’ll likely be enjoying those peas and Spam for much of your life.