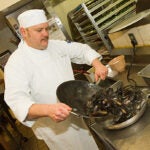 After nearly a century away, Harvard archaeology has returned to Iraq.

Jason Ur, the John L. Loeb Associate Professor of the Social Sciences, earlier this year launched a five-year archaeological project — the first such Harvard-led endeavor in the war-torn nation since the early 1930s — to scour a 3,200-square-kilometer area around Irbil, the capital of the Kurdish region in northern Iraq, for signs of ancient cities and towns, canals, and roads.

Already, Ur said, the effort is paying massive dividends — with some 1,200 potential sites identified in just a few months, and potentially thousands more in the coming years.

“What we’re finding is that this is, hands down, the richest archaeological landscape in the Middle East,” Ur said. “Due to the history of conflict and ethnic strife in this region, there was no work done in this area at all, so it really is a tabula rasa, so it’s a very exciting time.”

Unfortunately, he said, that blank slate is quickly being erased by development.

“One of the challenges that comes with this project is that it can only be done for a limited time,” Ur explained. “For the sort of landscape work that I do — I’m interested in finding individual places, but I’m also interested in the space between them, the physical traces of agriculture, and the roads and tracks that connect those places — those are the sort of ephemeral features that development will wipe clean. We’re coming in now at exactly the right time, because the economy in Kurdistan is booming and development is exploding across the region.”

Where earlier Harvard expeditions to Iraq focused on the excavation and preservation of artifacts from the ancient city of Nuzi, Ur is using aerial images to survey the region for signs of ancient settlements and how they are connected.

“These sorts of broad studies — and particularly landscape-scale studies — weren’t done until about the 1950s,” Ur said. “The result is that we have some very bright lights — places we know a great deal about — but often the surrounding area is completely dark. This type of work is not about excavating a specific area, but about trying to come up with a complete map of all the sites in a region and especially about being able to break it down by time, so we can see the growth and contraction of individual sites.”

To trace that settlement history, Ur relies on an unusual archaeological tool: spy satellites.

Using declassified spy satellite images from the 1960s, he is able to identify a host of landscape features, including those of ancient cities and towns, as well as ancient pathways and irrigation canals.

“It would take several lifetimes to survey an area this large using what we would call pedestrian methods,” Ur said. “The real advantage to using these images, however, is that they’re old — they predate any development that has taken place, so they’re like a time machine. We can look at these images and see what the historical landscape looked like.”

Ur also hopes to use a survey technique he pioneered with Bjoern Menze, a research affiliate in MIT’s Computer Science and Artificial Intelligence Laboratory, that relies on computers to automate the search for ancient sites across huge swaths of land.

Already, though, it’s clear that the region Ur is studying is remarkably rich in ancient sites.

“Using declassified material, we evaluated about 3,200 square kilometers, and found 1,200 sites with about 90 percent certainty,” Ur said. “We’ve missed one of the most important loci of early civilization because of historical accidents, and because it’s been a zone of conflict for so many years. Now that we can get there, we’re finally beginning to understand what’s been there all along.”