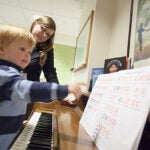 Help with kids. And pets. And …

Seven faculty members from Harvard University have been named American Association for the Advancement of Science (AAAS) Fellows. Election as an AAAS Fellow is an honor bestowed upon AAAS members by their peers.

The AAAS is the world’s largest general scientific society; it publishes the journal Science. Founded in 1848, the AAAS includes 261 affiliated societies and academies of science, serving 10 million individuals.

The fellows from Harvard:

Randy Buckner, professor of psychology and of neuroscience, for pioneering contributions in the study of the functional organization of the brain in cognition and in cognitive decline.

Rachelle Gaudet, professor of molecular and cellular biology, for distinguished contributions to structural biology with a focus on transport and sensory signaling through biological membranes.

Bussey Professor of Organismic and Evolutionary Biology Elena Kramer for distinguished contributions to the field of plant developmental evolution, particularly regarding the diversification of floral parts and the ecological significance of pollinator interactions.

Alvin Roth, George Gund Professor of Economics and Business Administration, for distinguished contributions to the fields of economics and business, particularly for advances in experimental economics and developing exchange markets for vital goods and services.

Sturgis Hooper Professor of Geology and Professor of Environmental Science and Engineering Daniel Schrag for outstanding contributions to climate change studies, the understanding of anthropogenic contributions to global warming, and the development of carbon capture and sequestration methods.

Xiaowei Zhuang, professor of chemistry and chemical biology and of physics, for distinguished contributions to super-resolution optimal imaging and its application to cells.

For more information on the nomination process.