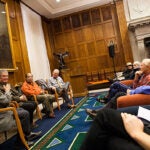 When jazz was king

During her 20 years at Harvard, Leslie Morris has led what any book lover might see as a charmed life. As the curator of Modern Books & Manuscripts at Houghton Library, she has befriended John Updike, corresponded with Gore Vidal, pored over cross-written letters by Jane Austen, and archived Emily Dickinson’s teacups.

But about a year ago, during a three-day business trip to Europe, Morris experienced cultural astonishment on a new scale. She viewed a vast collection of boxes, drawers, shelves — whole rooms — full of eccentric treasures dating back to the 16th century, all expressions of a top cultural engine: altered states of mind.

“I always explain it as sex, drugs, and rock ’n’ roll,” said Morris of the collection, now being unpacked, examined, described, and indexed at Harvard, a process known as accessioning. But the music collection and related artifacts went to the Rock and Roll Hall of Fame and Museum in Cleveland. Harvard, she said, “got the sex and drugs.”

The Santo Domingo collection is on long-term deposit at Harvard. “We do not own it,” said Morris, but the owners “want us to catalog it, and they want it available for research.”

In May, Morris returned to supervise shipment of the collection to Cambridge. It has an estimated 30,000 books and 25,000 posters, photographs, and other ephemera assembled by Colombian businessman Julio Mario Santo Domingo Jr., who died in 2009. As a student at Columbia University in the 1970s, Santo Domingo had been drawn to French poets of the late 19th century. Charles Baudelaire, for one, created a brand of romanticism that hinged on sex, death, and the pleasures of the senses. It was influenced by his use of hashish, opium, and alcohol. Baudelaire described the effects of such drugs most aptly in the title of his 1860 book, “Artificial Paradises.”

The Julio Mario Santo Domingo Collection is now the largest of its kind in the world, and will gradually be available to scholars of literature, fine art, photography, film, history, medicine, popular culture, and more. This is a range of disciplines that makes the collection uniquely rich even within Harvard’s enormously diverse collections. “Its size is really unprecedented,” said Morris.

Ranging far and wide
The collection’s breadth owes a lot to the two extraordinary collections that Santo Domingo had the foresight to buy and combine: that of the late Gérard Nordmann, a Swiss aficionado of erotica, and the one once held at the Fitz Hugh Ludlow Memorial Library in San Francisco.

The Ludlow collection contained 10,000 items related to psychoactive drugs. It was named after the American who wrote the first full-length work in English on the cannabis experience, “The Hasheesh Eater” (1857). Harvard is now steward of works by crusaders both against illicit drugs and for them, like Aleister Crowley, who wrote “Diary of a Drug Fiend.”

“To me, this is the iconic erotic novel of the 20th century,” Morris said of the book, which has never been out of print. She carefully unboxed the manuscript and laid it on a table in a basement room at Widener Library, where much of the collection is being unpacked. The manuscript, mostly in pencil, with scant revisions, is in five folders of paper, each sheet torn from an adhesive pad as it was finished. By the last folder, the manuscript hurried along in ink, and revisions appeared in flurries. How does the manuscript compare with the novel’s many editions, Morris wondered. “This is a good project for a graduate student.”

Standing nearby was Harvard archivist Alison Harris, the project manager who is unpacking most of the 700 boxes, which arrived at Harvard during the summer, and then recording what is in them. “It’s Christmas every day,” said Morris. “You never know what you’ll find when you open up a box.” As discoveries are made, she said, staffers blog about them at Modern Books and Manuscripts.

Most of the cartons were shipped by sea, fitted carefully into a steel container. But 14 cartons — containing vulnerable manuscripts, photographs, films, tapes, and artifacts on vellum — were shipped by air. “You worry a lot,” said Morris of preparing a collection like this for transport.

And you are amazed a lot, said Ryan Wheeler, the Harvard rare book cataloger who has been accessioning some of the books for placement in Houghton. He called the collection “pretty continually surprising.” There are many 19th-century books that were printed privately for covert societies of subscribers, volumes that rarely named authors, that concealed printing origins, and that even obscured publication dates. (One volume, Wheeler noted in a blog post, was dated “1863-1910.”)

Some surprises involve the content. “I’m working on the rarest material first,” said Wheeler, “so erotica is overrepresented.” (Suddenly, he added, his job has become an interesting focus at cocktail parties.)

Other surprises in the collection would appeal mostly to scholars. For instance, most of the older printed matter is in French, and much has never been cataloged in English. Others are first-time acquisitions for Harvard, including a first edition of Jack Kerouac’s 1957 classic, “On the Road.” (The collection includes five reel-to-reel tapes of Kerouac reading, singing, and talking with friends, along with a series of manuscript letters. “I’m not tough,” one reads. “I’m just a soft-hearted imbecile.”)

Still other surprises are aesthetic, including books privately printed for select audiences of wealthy men. Wheeler brought out a rich-looking volume with a pristine calfskin cover and tight binding, an illustrated volume of Baudelaire’s “Flowers of Evil.” Such books “are just lovely to handle,” said an appreciative Morris. “My department doesn’t really acquire things simply because they are beautiful.”

High and low art
Santo Domingo loved art, both high and low. For every 16th-century botanical publication with hand-tinted illustrations, or for every special edition, there are dozens of more humble artifacts of erotica, crime writing, and the drug culture: posters, buttons, comic books, law enforcement patches, and even a large box of rolling papers in bright packets.

Some objects were left behind, like the world’s largest collection of opium pipes. (“The library is not really set up for objects,” Morris explained.) When eBay was in its infancy, Santo Domingo had assistants scout the offerings for drug-culture snippets and geegaws, some of them snapped up for a dollar or two. (Harris showed one of her favorites, a shrink-wrapped game called “Stoner Trivia.”)

Harris laid out a dozen posters on a tabletop. Santo Domingo had had them carefully backed in linen so they could be unrolled without damage.

There were garish posters in French that advertised American movies. Others wryly celebrate getting high. One poster, in velvet, advertised the services, by blimp, of Air Cannabis. “Come fly with us,” it offered. Another played on an education theme. “Pot,” the poster assured, “teaches us about geography.” And lest other ways of altering the mind be left out, there was a poster of Fritz the Cat immersed in a bathtub, surrounded by several pairs of female legs. Its wishful legend said in French: “He has all the vices.”

From the ephemeral to the ethereal, these collectibles will aid scholars for years, said Morris. At Harvard, the Santo Domingo collection will be disbursed to libraries specializing in medicine, art, film, botany, poetry, and rare books. The Radcliffe Institute’s Schlesinger Library will get items for its cookbook archive. (The collection, explained Morris, includes “three shelves of cookbooks on how to make hash brownies and other hallucinogenic foods.”)

A onetime Harvard faculty member — were he still alive — would appreciate the material about altered states. Psychedelic pioneer Timothy Leary once reacted when First Lady Nancy Reagan popularized a campaign of “Just Say No” against illicit drugs. Leary preferred another line, which he used to conclude “Flashbacks,” his autobiography: “Just Say Know.”

The Modern Books & Manuscripts Department of Houghton Library is sponsoring a lecture at 5:30 p.m. on Nov. 14 concerning the Julio Mario Santo Domingo Collection. “Collecting the Counterculture” will feature London rare books dealer Carl Williams of Maggs Brothers Ltd. The event, in Houghton’s Edison & Newman Room, is free and open to the public.