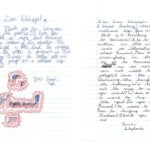 Spencer Lenfield ’12 never thought he’d be able to travel abroad as an undergraduate, until he won the 2010 Jacob Wendell Scholarship Prize, an annual award that identifies the most promising and broad-ranging scholar in Harvard’s freshman class. During the next two summers, he used the $17,000 award to study art history in Paris and to tour Britain by rail.

Now a Rhodes Scholar at the University of Oxford, Lenfield says the Wendell changed his path as a student.

“Winning the Wendell award really woke me up,” he said. “I realized that there were lots of other opportunities available through Harvard that never would have even been on my radar screen before. I remember telling a friend of mine, who was a few classes ahead of me, that I’d won the award, and she responded that it was huge because it meant that I could be in the running for the Rhodes and Marshalls in a few years. At the time I had only the vaguest of notions what either of those awards were, but as it turned out, she was absolutely right.”

This week, more than 100 sophomores finalized their own applications for the Jacob Wendell Scholarship Prize. Established in 1899, the prize recognizes one student based on his or her freshman year academic record, an essay, and two letters of recommendation. It is awarded without reference to financial need, and the prize recipient is free to spend the $17,000 award as he or she sees fit.

Speaking from the vantage point of more two decades, former Rhodes Scholar and 1990 Wendell recipient Noah Feldman, the Bemis Professor of International Law, agreed that winning the Wendell Scholarship Prize created opportunities for him that many students never envision.

“The Wendell helped set me on my professional path,” said Feldman, who has served on the prize’s selection committee. “Because it focuses on broad freshman intellectual interests, winning the Wendell award sent me the message that the University believed in my potential to try and become a scholar someday.”

In addition to the prestige of winning the Rhodes and studying at England’s oldest university, Lenfield has found the chance to extend his studies beyond graduation an invaluable piece of his education. “A number of people at my graduation expressed a desire to have one more semester or one more year to study,” he said. “Being a Rhodes Scholar means I have the chance to do exactly that — and I can trace that back to winning the Wendell my sophomore year.”

“We reach out to sophomores in the fall and let them know that their exceptional work as freshmen has made them eligible for the Wendell prize,” said Susan Lively, secretary of the faculty and director of the Prize Office. “But we consider more than just their grade-point average: We also look at how challenging their course work was in their freshman year, and how much students were pushing themselves.”

In mid-October, eligible candidates gather their application materials, including two letters of recommendation — often requested from faculty members — and an essay. The prize’s selection committee of Harvard faculty members then reviews those materials, and after considering all documents in several rounds, the committee selects final candidates, who are brought in for in-depth interviews with the committee.

For Lenfield, winning the Wendell raised the bar on his own academic expectations for himself. “It’s one thing to be told through high school that you’re a good student, but it’s entirely another to be told in your sophomore year that — by the standards of an institution that is one of the best undergraduate institutions in the country, if not the world — you’re a very good student with a lot to offer,” he said. “Being nominated for the Wendell signals that you’re doing really good work, and it encourages you to take your academic studies that much more seriously at an early stage. Just finding out that you’re eligible to apply, that you have the academic standing to apply for something for which only people at the top of their class at Harvard are eligible, is a remarkable experience.”

In addition to the prestige of being recognized as the best scholar of his or her freshman class at Harvard, Wendell award winners are also invited to a black-tie dinner with past award recipients and members of the Wendell family, a tradition that has a powerful effect on new award winners. “When I first attended the black-tie dinner in Loeb House, I felt as though I were entering a magical, glamorous world where scholarship was the valued ideal,” Feldman said.

The awarding of prizes dates back to the early days of the College. Another of the awards administered by the Prize Office, the Bowdoin Prize, provides awards in multiple fields to both graduate and undergraduate students, with prize funds of up to $10,000. Bowdoin Prize applications for graduate essays in the English language, and in the natural sciences, are due next month.

“The Bowdoin has attracted scholars who have gone on to do nationally recognized work,” Lively said. “To apply for the prize, students must submit a high-caliber essay of 7,500 words or fewer. The award is an outright check.”

Steve Biel, executive director of the Humanities Center at Harvard and chair of the prize’s selection committee since 2009, says that the quality of submitted papers is such that he learns something new from them every year.

“You get to read outstanding essays from undergraduate and graduate students, across multiple disciplines,” he said. “It’s that combination of original scholarship and quality of writing that allows you, as a reader, to get really swept up in it. The ability of students, particularly undergraduate students, to make stunning original discoveries — and submit what are essentially publishable papers — is really impressive.”

In fact, an archive of winning essays, available at the Harvard University Archives in Pusey Library, stretches back hundreds of years. Jim Wilkinson, who won the Bowdoin prize in 1973 and served as chair of the selection committee, says that legacy is part of what makes the Bowdoin special.

“Ralph Waldo Emerson won the Bowdoin Prize in 1820 and 1821,” Wilkinson noted. “To read his essays — which are of course written in his own hand — is really an amazing experience. It’s wonderful to have this record available to Harvard students and faculty, even 200 years later.”

“It’s terrific that Harvard recognizes excellence in this way,” Lively said. “A great benefit of working with Harvard prizes is that we see the many different ways in which our students embody excellence, including character, public service, House spirit, outstanding all-around ability, and academic achievement. Harvard is full of amazing people, and I’m delighted that the University recognizes outstanding qualities in a variety of areas.”