The sounds of nature, as music 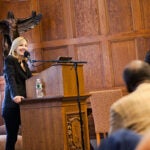 When Bernie Krause headed out into the woods outside San Francisco to record soundscapes in the natural world, he had an epiphany that changed his life.

“I decided I never wanted to spend another minute indoors,” he told an audience Thursday night in Boylston Hall. The result of the forest recordings became the 1970 album “In a Wild Sanctuary,” a collaboration with Krause’s recording partner Paul Beaver. It was the first album of its kind to address ecology and to incorporate natural sounds.

Soundbytes: The sounds of nature, as music

Sound excerpts from “The Great Animal Orchestra: A Performance & Dialogue in Soundscape and Poetry” at Boylston Hall Sept. 27.

Krause, a pioneering electronic and studio musician who once worked with the likes of the Byrds, the Doors, and George Harrison, discussed his career traveling around the world recording animal and natural soundscapes during a Woodberry Poetry Room talk called “The Great Animal Orchestra,” alongside poet Jonathan Skinner, whose nature poems were paired with Krause’s recordings.

“Creatures vocalize in special relationships with one another, just like instruments in an orchestra,” said Krause. He compared a soundscape of cicadas, chestnut-winged babblers, and gibbons to classical music, showing the animals’ music on a staff, reading the notes as though Beethoven wrote them. From recordings of creatures both small — who knew that sea anemone made noise, let alone moaned? — and large, Krause conveyed the diverse and wonderful world of noise that is all around us.

Krause talked about the strange congruencies between natural phenomena and animals whose sounds seem to mimic those in nature. He played a recording of the electromagnetic frequencies of lightning storms happening at the equator, which travel throughout the Earth’s crust, eventually reaching the North and South Poles. The static noises of the storms were eerily similar to the sounds of two breeds of seals at opposite ends of the Earth, who “also sound electronic to me,” said Krause. “So weird.”

Also compelling were the ways in which Krause’s recordings reflect an environmental shift over time. A healthy coral reef broadcasts endless snap, crackle, and pop, but a dying coral reef, which Krause recorded and transmitted, is merely the sound of the waves crashing, and a few snapping shrimp.

“Some people say animals don’t feel emotion,” he said, “but listen to this.” And with that, Krause played a heartbreaking recording of a male beaver crying while he circled the river searching for his family, which had been blown up by dynamite earlier that day.

Skinner, who is the founder of the journal “Ecopoetics,” which features creative and critical intersections between writing and ecology, read from various books of poems, which cull from the natural world, both in subject and in style. Skinner touched on the ways that poetry engages, and emulates, the rhythms of the natural world, which is increasingly fragile.

Asked Skinner in his introduction: “We have filled the atmosphere with our stories, and still we cram in more. The delicacy of our planet makes its own noise. Can we listen, to listen?”

The Sensory Ethnography Lab and the Film Study Center also co-sponsored the event.