Paperwork for a new future 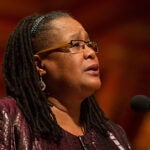 Harvard University submitted a new development agenda for Allston Thursday (Oct. 18), detailing nine projects slated for development over the next 10 years. The projects identified complement planned activity on the Health and Life Science Center and the residential and retail development envisioned for Barry’s Corner.

The IMPNF paints a 10-year picture of development that, according to Harvard Executive Vice President Katie Lapp, “will provide critical physical improvements serving key academic needs while establishing Barry’s Corner as a nexus of University and community interaction that will be transformative for Harvard and the Allston community.”

Yesterday’s filing includes nine building and renovation projects that the University aims to complete over the next decade. Most of the projects will happen internally on the Harvard Business School (HBS) campus or athletics areas and will be funded through a variety of sources, such as University funds and philanthropy, including the $40 million Chao family gift announced last Friday, which will help finance replacement of HBS’s Kresge Hall with a new executive education building. Included among the nine projects are the renovation of historic Harvard Stadium and the construction of a new basketball facility on North Harvard Street, adjacent to Barry’s Corner.

The plan includes a new hotel and conference center fronting Western Avenue near the intersection with Soldiers Field Road, and a “mixed use/institutional” building on a portion of the site where the Charlesview apartments stand today, thereby creating a corridor of activity and introducing a variety of uses along Western Avenue.

In addition to building and renovation projects, the plan details new roadways and traffic patterns, a publicly accessible grove of trees on the northeast boundary of Barry’s Corner, wider sidewalks to accommodate an expected increase in pedestrian activity, and sustainability improvements that will make the area greener and more inviting.

Harvard’s Health and Life Science Center, though not listed as a project in the IMPNF because of its status as a previously approved project, remains a key component of Allston development. The project represents the single largest investment in a science facility ever made by the University, and the largest envisioned for at least the next decade. The University is currently engaged in a space-planning process and architectural review of the building. Early site work is expected in 2013, with construction anticipated in 2014.

“Allston presents the University with the opportunity to develop a unique innovation hub. It will be focused on both teaching and research in translational life science and engineering,” said Harvard Provost Alan M. Garber. “In Allston, we will build on our research expertise and entrepreneurial spirit, and take advantage of the proximity to Harvard Business School and the i-lab [the Harvard Innovation Lab] to explore and develop new technologies in critical areas like drug delivery, medical devices, smart materials, and tissue engineering.”

A second major development project, the residential and retail commons proposed for Barry’s Corner, is also being permitted separately from projects included in the IMPNF. The University has partnered with Samuels & Associates, a well-known Boston real estate developer, to bring the noninstitutional, mixed-use project to fruition.

The Health and Life Science Center and Barry’s Corner residential and retail commons — like projects and renovations discussed in the new IMPNF — are expected to play a vital role in attracting consistent pedestrian activity to the area. The wider sidewalks described in the plan, for example, are expected to be needed to handle the increased foot traffic of hundreds of researchers, faculty, and students from the Health and Life Science Center, as well as that of residents and customers of the Barry’s Corner residential and retail project.

“Harvard, in partnership with the city and the community, is seeking to enhance our campus in Allston and strengthen our community connection in Barry’s Corner,” said Lapp. “The plan we’re submitting today includes nine projects that we will build in the next decade and articulates a vision for the area as a vibrant, walkable, and environmentally sustainable place. We are excited to be moving forward.”

Though Harvard has submitted the plan to the BRA, this is not the first time that city and neighborhood officials have seen the ideas it contains. Before its filing, the content was previewed by the BRA, the Harvard Allston Task Force, and the University’s Allston neighbors through an extensive public meeting schedule.

The IMPNF is the culmination of years of outreach and discussions within Harvard, with the city of Boston, and with members of the Allston community. The plan draws from the Allston Work Team recommendations, drafted by a committee of Harvard deans, faculty members, and development experts in light of the shifted economic landscape. The recommendations, issued in June 2011, proposed a path forward in Allston, including resumed construction on the science site, housing, and a future Enterprise Research Campus. The University adopted those recommendations in September 2011.

Football, basketball, and business
Within the plan filed this week are several projects significant to the Harvard community, though they may be less visible to the outside community.

“It is impossible to overstate how important our campus is in creating a transformative educational experience for the students and executives who come to Harvard Business School.” said Angela Crispi, dean for administration. “Although we are a global institution, Boston is our home, and it becomes a second home for our graduates, whose generosity helps us to evolve the campus to meet the ever-changing needs of business education.”

The renovation of Harvard Stadium will include preservation of the existing structure, built in 1903 and a National Historic Landmark. The revamp will include installation of an elevator to improve accessibility to disabled visitors, addition of locker rooms and meeting and office space, an upgraded press box, and construction of enclosed club seating, all of which will result in a slight reduction in overall seating capacity. An extension to the stadium’s west side will house some of the additional space.

Also included are plans to construct a new home for Harvard basketball. The current facility at the Lavietes Pavilion seats just 1,950 and is the smallest in the Ivy League. A new facility with 3,000 seats is proposed for 175 North Harvard St., next to the planned Residential and Retail Commons at Barry’s Corner and on the site of the current Harvard Allston Education Portal, which will be relocated within Barry’s Corner. The building also will include about 140,000 square feet of mixed-use and institutional space.

Included in this week’s filing is a mixed-use building for the site of the Charlesview apartments. Current residents are expected to move to new apartments being constructed along Western Avenue in the former Brighton Mills shopping center sometime in 2014. 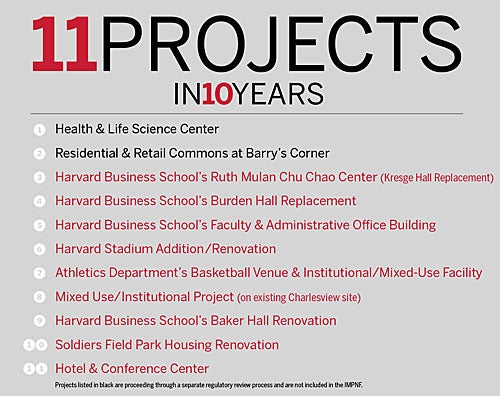 The exact institutional use is yet to be determined, but planners envision possible development of a 200,000-square-foot building of between six and nine stories on a portion of the site. Although the site is set back from Barry’s Corner, separated by an existing grove of trees, Harvard planners see the location as important to the corner and are proposing a ground floor with service, retail, institutional uses, and programming. The grove itself, which will extend further into Barry’s Corner, will be a site for informal gatherings and performances.

Planners envision some changes to traffic patterns in the corner itself. Construction of a road through the current Charlesview site, linking Western Avenue and North Harvard Street east of Barry’s Corner, will facilitate cars turning right from Western Avenue to North Harvard Street. This change will allow the right turn lane in Barry’s Corner ­­— which cuts off a small island — to be eliminated and will permit the sidewalk and trees in front of the Charlesview site to be extended further into the corner.

Managing water for sustainability
Environmental sustainability, a University-wide priority, is also a consideration for the Institutional Master Plan. Although the sustainability features of individual projects will be finalized during planning for those buildings, the overall sustainability goal is also apparent in the larger-scale planning document.

The planning document sees a net increase in green space in the area, encourages foot and bicycle traffic, and seeks to manage water on site in sustainable ways.

Landscaping is planned so as to absorb rainwater, slow runoff, and allow natural filtering processes to come into play. Rainwater capture and reuse is planned, and the use of nonpotable water is being explored to support landscaping.

For the next 30 days, community members and city agencies will have the opportunity to give feedback on the plan. The next Harvard Allston Task Force meeting is scheduled for Nov. 7.