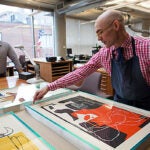 The art of saving art

In the entrance to Harvard Law School’s Langdell Hall is a marble statue of long-ago professor Joseph Story, who is reputed to have saved legal studies at the University from an early demise. Only one student was enrolled at the Law School for the 1828-29 academic year. Story himself — who arrived in August 1829 as the first Dane Professor of Law — claimed there were none. At the time, Harvard Law School (HLS) — founded in 1817 — was barely a decade old.

So it is for a good reason that generations of students have rubbed the forward left toe of the marble statue for luck. Without Story, a charismatic teacher and a sitting Supreme Court judge, the story of Harvard’s school of law — so celebrated today — would have been a short one.

This fall, visitors to Langdell Hall have an opportunity to take a deeper look at the professor who saved a School. “A Storied Legacy: Correspondence and Early Writings of Joseph Story” is an exhibit of letters and manuscripts on display through Dec. 7 in the Harvard Law School Library’s Caspersen Room. (The room is open to the public from 9 a.m. to 5 p.m. Monday through Friday.)

Viewers can read a few original letters in Story’s neat, compact hand. The missives relate to the law, but spill over into political commentary. “We are falling on evil times,” the jurist wrote in 1837 to John Pittman, a Rhode Island judge. “I greatly fear we are approaching a dissolution of the union … if our present state of hostile feeling continues.” It was a prescient look at the coming Civil War — but Story was already an old hand at the underlying issue, having delivered an anti-slavery speech in 1820.

Exhibit-goers can also look at two open pages from an astonishing enterprise he began in 1808, while still in his 20s: a digest of items from American and international law. It came at a time when — as one scholar wrote — Story was eager to describe “an autonomous science of law.” In the tiniest of script, the future jurist summarizes precedents, doctrines, opinions, and statutes under headings like “Admiralty,” “Poor,” “Slaves,” and “Merchant.”

Story drew on the three resulting volumes, completed in 1812, for the rest of his life. They were a touchstone for his prolific legal writing. (By the time of his death, Story — a best-seller in his day — was making $10,000 a year just from his books.)

The Caspersen Room exhibit, in two long glass cases, is modest. But it is a material entry point to a much larger collection, the Joseph Story Digital Suite. Internet visitors can’t rub a statue’s marble toe, or peer at the reality of Story’s precise handwriting. But they can access the three-volume digest of law he labored over until a year after joining the Supreme Court in 1811, at age 32. (Story was the youngest judge ever to be named, a record that still stands.)

The digital suite also includes Story’s official papers (1796-1845) and his 21-year correspondence with Pittman, a federal district court judge. That fruitful spate of letters offers a rare glimpse into the workings of these early federal courts. (In Story’s time, Supreme Court justices oversaw these courts, and rode the circuit twice a year. Story’s circuit included Maine, New Hampshire, Massachusetts, and Rhode Island — states he used as laboratories of legal reform, according to the exhibit.)

Still, the exhibit — with its real paper and ink and red stains from sealing wax — has power. If you go, look to the left of the cases to see a Gilbert Stuart portrait of a very young Joseph Story. Most images of him show a bespectacled and balding older man. Stuart seizes a moment when Story looks brash and athletic, and has a full, smooth, ruddy face and a strong jaw.

It was painted not long after Story went through the fire of legal studies himself — a period he recalled with horror. Story graduated from Harvard College in 1798 and moved back to his native Marblehead, Mass., to read the law with a practitioner. He broke his head on “Coke on Littleton,” the first volume of a stodgy but seminal 17th-century legal treatise on the common law by Sir Edward Coke, who was hardly known as a stylist. “I took it up,” recalled Story in an autobiographical sketch, “and after trying it day after day with very little success I set myself down and wept bitterly.”

Story was admitted to the bar in 1801, but fancied himself a poet as well as a lawyer. The two sides converged in “The Power of Solitude” (1804), a two-part poem with careful summaries and copious footnotes.

Luckily for Harvard, Story fell in love with the law. A motto over the mantelpiece in the grand Caspersen Room gets to the core of the Story story, and the power the past can still have in the present. Ironically, it’s from the pen of Sir Edward Coke. “Out of the ould fields,” he wrote, “must spring and grow the new corne.”