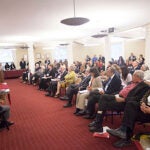 Even among Harvard faculty, few professors can claim the mantle of publicly certified “genius.” As of Tuesday, however, two University scholars — an economist who tackles public problems with hard data and a pediatric neurosurgeon whose innovative techniques have been put to use in everyplace from Cambridge to Uganda — can do just that.

Chetty and Warf are two of 23 recipients recognized by the John D. and Catherine T. MacArthur Foundation for their “extraordinary originality and dedication” to their chosen fields. The honor comes with no-strings-attached grants of $500,000, paid over five years, which recipients may use to fund the creative, intellectual, and professional pursuits of their choice.

Nominations are anonymous, and recipients are not told in advance that they are under consideration — meaning that the phone calls notifying them of their awards come as a bit of a shock.

“I was really surprised,” said Chetty, who was having lunch in downtown Boston with his mother at the time. “I got a call from a number I didn’t recognize. I ignored it a few times and eventually picked up.”

Warf was at a hotel in Rio de Janeiro, planning to speak at a conference, when he received the news.

“It was a little awkward. The [cellphone] connection wasn’t so great,” he said with a laugh. “I was floored.”

Chetty is an up-and-comer who, at 28, was one of the youngest economists to be offered tenure in Harvard’s history. He has a history of precocious achievement: After graduating from Harvard College, he stayed on at the University and earned his doctorate in just three years. (He then spent several years as an assistant professor at the University of California, Berkeley, returning to Harvard to join the faculty in 2009.)

His research agenda has been equally ambitious, touching on issues from taxation to teacher quality to unemployment. He hopes to steer public policy debate away from talking points toward data points, he said.

Earlier this year, a finding by Chetty and his co-authors that the quality of a child’s teacher early in life can boost future income made national headlines and earned a mention in President Barack Obama’s State of the Union address.

“We want to try to connect to the public discourse using rigorous scientific methods, so it’s not just public opinion,” Chetty said.

The award frees up his time to pursue the next big ideas in public economics — such as an ambitious study of equality of opportunity in the United States that would track economic mobility from one generation to the next by ZIP code, pinpointing conditions that help to promote a level playing field.

The MacArthur “has given me the freedom to pursue the types of large-scale projects that will take years,” Chetty said. “But it’s also a vote of confidence that people are interested in this type of research. I hope it’ll motivate our research team to do more of this type of work.”

For Warf, the award is not a validation of a young career on the rise, but recognition of hard-won innovations made halfway across the world.

In 2000, Warf, his wife, and their six children left his native Kentucky for Uganda, where he started a pediatric neurosurgery hospital under the auspices of the Christian medical nonprofit CURE International.

While there, he noticed that the country’s poor children suffered an unusually high incidence of hydrocephalus, a fluid buildup inside the skull that puts pressure on the brain. He went on to publish groundbreaking research on the causes of infant hydrocephalus, linking it to prior brain infection.

Warf also developed a novel technique for treating hydrocephalus. First-world doctors often rely on shunts, tubes that allow fluid to escape from the brain into the abdominal cavity — though half of shunts fail within two years of the procedure.

In Uganda, where neurosurgeons are scarce and access to nearby hospitals is limited, Warf created a workaround procedure that dramatically lessened the need for follow-up emergency procedures. The technique, known by its shorthand ETV/CPC, cauterizes brain ventricle tissue so that less cerebrospinal fluid is produced, and with minimal invasion makes an opening inside the brain that reroutes the dangerous fluid buildup to the base of the brain, where it is supposed to flow.

“That’s the interesting and quirky thing — a procedure that was developed and proven in terms of outcomes in sub-Saharan Africa is now starting to influence care in the United States,” Warf said. “It’s the way that I treat hydrocephalus in babies now here at Children’s. I think over the next decade or so, it’s going to increasingly become the first treatment for babies with hydrocephalus.”

The family returned to the United States in 2006, and Warf came to Children’s, where he had been a fellow earlier in his career, in 2009. He has continued to oversee the Ugandan hydrocephalus project from abroad, including a program that has trained 20 neurosurgeons from developing countries in Warf’s methods. It has been an expensive and challenging juggling act that the MacArthur grant will make much easier, he said.

“I feel a bit of a weight of responsibility,” Warf said. “There’s this opportunity that’s just fallen into my lap that I wasn’t expecting. I want to be able to be a good steward of that and make the most of it.”