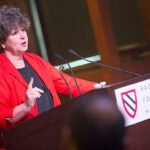 Seeking to connect on water issues

One day last month, two students from the Harvard Graduate School of Design (GSD) visited the home of a migrant worker on the outskirts of Xiamen, a fast-growing, Chinese coastal city. They sat on stools and drank tea and took in their surroundings: two bedrooms, an aged computer, and a tiny kitchen with a stove and small windows.

“It felt bright and airy inside,” though the exterior was rudely built and starkly modern, said Sonja Cheng, M.Arch. ’14. “It was comfortable.”

Her companion, Waqas Jawaid, M.Arch. ’14, described walking to the apartment, where seven people live. It was tucked inside a warren of narrow alleyways lined with little shops and near a shady oak tree where neighbors gathered. “Every open space had a value,” he said of the informal settlement. “Something was happening there.”

The oak tree and everything else will soon be razed to make way for developments called mega-plots, assemblies of dense, high-rise housing built on speculation, and designed to accommodate a city population expected to reach 6 million, nearly double its current size, in as little as five years.

Xiamen, a fishing village and military outpost only 30 years ago, is less than seven miles from islands controlled by the Republic of China, or Taiwan, a much smaller rival nation that the People’s Republic of China now sees as a proximate economic opportunity.

The city is providing the first case study for a groundbreaking, three-year studio project at GSD. Cheng and Jawaid are among the program’s first 12 students. For three successive years, the project is sending students on weeklong field studies of three fast-growing Chinese cities, all of which lie along cultural fault lines. For the rest of the semester, the students will create design ideas inspired by both theory and ground-truth realities.

In fall 2013, students will travel to and study the gambling and tourism mecca of Macau, a former Portuguese colony administered by China the same way Hong Kong is, as a model of a “one-nation, two-system” paradigm. In 2014, students in the course will visit a city bordering North Korea.

“I call them frontier cities,” said Christopher Lee, the GSD’s design critic in urban design, who will teach each studio course. “These cities grew out of geography closest to coasts or borders, and from influences outside cities in China.”

These outside influences have made China’s “frontier” cities broader and resilient, he said, and better able to “accommodate differences.” They are also urban areas that are growing fast and vying for first-tier city status, said the Malaysia-born Lee, who is co-founder and principal of Serie Architects, a firm with offices in London, Mumbai, and Beijing.

Xiamen is like the other cities GSD students will visit, he said, in that a “space of cooperation” exists along what not long ago was a geopolitical fracture zone. His hope for the new studio course, which is funded by AECOM Technology Corp., is that client cities will benefit from student designs inspired by the cauldron of reality.

“They thoroughly enjoyed the immersion,” said Lee of the September sojourn to Shanghai and Xiamen. “It’s a unique experience that GSD offers students.”

Jawaid agreed. “There’s this immense weight of reality we became aware of,” he said of the interaction with planning officials and the intensive site visits in China. “Feet and inches and Google Earth [are] not enough. There are a lot of practical challenges … but a lot of freedom to test new ideas. This is stuff we don’t see on paper.”

Jawaid and Cheng are partners on a design project based on matching the reality of a specific mega-plot site with what they learned from the flexible intimacy of Xiamen’s informal settlements. (They also draw on case studies of urban spaces in Paris, Venice, and Beijing.) All 12 students presented their preliminary ideas in an Oct. 18 midterm, or “pinup,” in GSD parlance. The four-hour session requires six student teams to present “the first sketch of an idea,” said Lee. They used large-scale drawings, PowerPoint, and text to analyze their sites and argue for design interventions.

The primary concern is “instrumentality and efficiency,” Lee said. “We believe here at GSD that design matters, and that design is not just a way of solving problems, it’s a way of thinking.” That requires giving students a grounding in both theory and design.

This fall, Lee is also teaching a related course, a “cross seminar” for 24 students on the theoretical and historical foundations applied in the studio course.

He used one notion as an example, that “nature and architecture are seen as one in the Chinese tradition,” said Lee, in contrast to the classical Greek idea that cities are places “where one takes refuge from nature.”

But warming and humanizing architectural norms in China is a challenge, said Jawaid, because the focus is on “grand-scale planning, [not on] the level of the room or space for individuals.” Structures are built very fast in China, often simply following patterns outlined in official catalogs. The plans seldom account for local voices, he added, using a style of business that “embraces the ethos of capitalism without the balancing force of democracy.”

That’s where the migrant worker’s kitchen comes in, and the image of the community oak tree, and all the organic, intersecting properties that he and Cheng call “village” design. At the same time, “there is also a danger in fetishizing the slum” and forgetting its squalor, said Jawaid. “Part of our job is to find what makes that [informal settlement] work, and incorporate that into future development.”

In their preliminary design, Cheng and Jawaid superimpose on their assigned mega-plot the humanizing elements of three template styles: “village,” with its intersecting dwellings; “shop-house,” with its British-style narrow streets lined with stores, and with arcades that slow pedestrians and give them time to browse; and the more typical “tower” style of modern China, with a single, high-rise residential building where the only common space is the elevator core.

This tower-style has its uses, said Cheng, because “there is a need for efficiency, just to house everyone.” But the tower could benefit from other design influences. Cheng and her design partner have a novel name for their eclectic overlay system of hybrid of influences: plaid.

Developers in cities like Xiamen have to build fast, and innovation can slow construction down. “We have the luxury of an academic space,” said Jawaid. “We have time to go further … and question how that development is happening.”

Creativity like this is the key in the course that blends theory with practice, said Lee. “We do not want students to create projects that can be implemented immediately. We want to think a little bit further. We are in for the long gain.”

The studio’s final review is scheduled for Dec. 11. Three months of student work will be presented to planning officials from Xiamen and executives from AECOM.

Frontier cities such as Xiamen could benefit from fresh designs, and the new studio course can help. “We cannot rely on the mega-plot,” said Lee, who envisions a future China that relies on high-tech and service industries. “It’s not conducive to what I call spaces of learning and places of cooperation.”