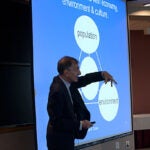 A close eye on population growth

Reality has not been kind to the large Chinese statue in Harvard Yard, but maybe virtual reality will be.

A group of Harvard digital preservation experts dedicated their evenings last month capturing a three-dimensional scan of the marble monument, a gift of Harvard’s Chinese alumni on Harvard’s 300th birthday in 1936.

The statue, on the west side of Widener Library, is of a tortoise-dragon figure bearing a large rectangular stele on its back. Though faded with time, the monument’s inscription extolls the virtues of culture and of learning, and praises Harvard for its role in educating the 1,000 Chinese alumni in whose name the statue was donated.

The statue, called the Tercentenary Stele, has been damaged by the elements and by acid rain. Its inscription, which originally stood out against a black painted background, is barely legible.

Jeffrey R. Williams, executive director of the Harvard Center Shanghai and one of the scanning project’s organizers, said concerns about the 17-foot-high gift’s condition have been growing for years. In the 1980s, Henry Lie of the Fogg Museum Conservation Department raised an alarm, saying the monument had suffered more damage in its 50 years in Cambridge than during many more years in Beijing. After his warning, the statue was covered each winter. Discussions are ongoing about further conservation measures, such as replacing the statute’s lost sign and repairing its cracked base. There have also been discussions about moving it indoors to avoid further natural damage, though its 27-ton weight would present a structural challenge for any building.

“The major risk is to the inscription, which is already quite faint compared to 1936, but so far still legible,” Williams said.

The scanning project, Williams said, preserves the historical record of the monument as it is now. The resulting 3-D models act much like molded and cast replicas, only preserving much greater detail in a virtual format. From the data, two-dimensional screenshots and three-dimensional physical copies can be made.

To do the job, Williams contacted Barbara Fash, director of the Corpus of Maya Hieroglyphic Inscriptions program at Harvard’s Peabody Museum of Archaeology and Ethnology, who conceived a 3-D scanning initiative to preserve hieroglyphic writing on Maya monuments. Fash and Alexandre Tokovinine, a Peabody researcher and lecturer on anthropology, have worked for years to master the 3-D scanning technology. Tokovinine recently completed scanning the large hieroglyphic stairway at Maya ruins in Copan, Honduras, and has traveled around Central America for other scanning projects. Although the Chinese stele project falls outside their normal Maya focus, the Corpus team was pleased to put their 3-D technology to use to preserve an eroding Harvard inscription, Fash said.

“The marble is eroding. [Acid rain] has softened all the edges,” Fash said. “It’s very lightly incised. The fear is that it would continue to erode away.”

The Tercentenary Stele project, paid for by the Harvard China Fund, began last month with the placement of a large white tent over the monument. The scanning is best done at night to minimize interference with the scanner’s optical light system, so Fash, who directed the project, arranged for Tokovinine and two student assistants to spend evenings over two weeks conducting scans of the monument. Each scan, captured by the scanner’s high-tech cameras while attached a long boom, covered just a portion of the statue, creating approximately 700 overlapping images that were knit together by a powerful computer program into the final, complete 3-D model.

“It’s a way for us to see how far we can push, how large an item we can scan,” Tokovinine said.

The monument dates to the early 1800s and stood in the Old Summer Palace, Yuan Ming Yuan, that was razed in 1860 by French and British troops during the Second Opium War. The statue was purchased by Chinese alumni and reinscribed to mark the University’s 300th anniversary.

“My hope is [that] this scanning project will lead more people to think about how we care for and honor this important piece,” Williams said. “The earliest test scans I saw before returning to Shanghai were terrific, so I am excited to see the final result.”