‘Thou shall be inventive’ 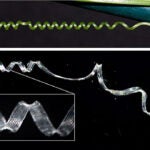 Clues in the cucumber’s climb

Using science, chefs are reimagining what and how we eat

Chemistry and the kitchen aren’t separate worlds anymore. Throw in a bit of artistry, and you just might incarnate today’s cutting-edge chef who uses liquid nitrogen to make an insta-ice cream, right at your restaurant table.

Science and food are as married as salt and pepper. Even Benjamin Franklin’s historic experiments with oil on England’s Clapham Pond relate to the formation of mayonnaise, according to Harold McGee, New York Times food science columnist and an authority on the history of the school of cooking now referred to as molecular gastronomy.

“His experiment is directly relevant to understanding mayonnaise making, because what you’re doing in mayonnaise making is trying to coat lots and lots of oil surface with emulsifiers from egg yolk, so all these things give you an insight into the fundamental aspects of nature.”

McGee, alongside chef-mixologist Dave Arnold, headlined Tuesday night’s season opener of the “Science and Cooking” public lecture series, part of the Gen Ed course “Science and Cooking: From Haute Cuisine to the Science of Soft Matter,” sponsored by the Harvard School of Engineering and Applied Sciences.

Playing with one’s food goes way back, said McGee. Even an unearthed medieval recipe for roast chicken contained a lively element: tying the chicken tightly, so that when the bird cooks and air tries to escape, the sound of the air resembles a chicken’s call.

But with sanitation worries and the emergence of the Food and Drug Administration early in the 20th century, food and fun took a back seat to safety, he said. But chefs revolted against this conservatism, and in 1973 French chefs Henri Gault and Christian Millau published their 10 commandments of nouvelle cuisine, with No. 9 being “thou shall be inventive,” a motto that still resonates.

Arnold, who directs the French Culinary Institute’s culinary technology department, showcased some contemporary food play. Working with a puck of hardened but pliable cooked sugar, Arnold hand-pulled the disc into a doughnut, and with the aid of cornstarch, which prevents sticking, pulled the strings longer and longer, twisting into a figure eight, stretching again, figure-eighting again, and so on, and so on, until the number of strands — still intact — amounted to more than 16,000. Anyone with an interest in making dragon’s beard, essentially cotton candy, can do so with pantry items. All you need is sugar, vinegar, water, and cornstarch.

Arnold, who recently opened the New York City bar Booker and Dax, espoused the wonders of agar agar, a chef’s trick of the trade derived from seaweed. Used to alter the viscosity of ingredients, agar agar has other useful properties. Normally, when citrus is added to dairy, curdling happens. But agar agar prevents that reaction, as Arnold demonstrated with an orange-flavored whipped cream.

Arnold is as adorably mischievous as Ferris Bueller and talks as fast as a car salesman. The rapt crowd laughed equally upon hearing his mix of scientific jargon and original Arnoldisms.

Plucking eggs cooked at various temperatures inside an immersion circulator, Arnold cracked each, from runny and inedible to the perfectly creamy benedict egg to boiled solid. Science changed the way breakfast is served in this country, said Arnold, who then wistfully remarked, “You could spend your whole life thinking about eggs and have a reason to get out of bed every morning.” And he does.

The “Science and Cooking” public lecture series is ongoing through December. View a full schedule of events.