Spend an evening with champions 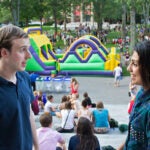 42nd annual figure skating exhibition will be Sept. 29 and 30

Tickets are $25 for adults, $12 for children and senior citizens, and $8 for Harvard University students. Discounted group tickets are also available for purchase. Tickets can be purchased through the Harvard Box Office. For more information, updates on performers or ticket sales, visit www.jimmyfund.org/skating or www.aneveningwithchampions.org. “An Evening with Champions” can also be reached through email at info@aneveningwithchampions.org or by phone at 617.942.1392.