Hope for continental recovery, in 2013 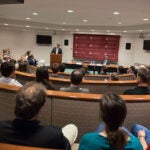 A firm voice on Europe

After years of austerity measures and financial reforms aimed at unhealthy economies and national debt levels, a top European official on Tuesday cited hopeful signs that a “slow and subdued” European recovery could begin by next year.

Olli Rehn, vice president of the European Commission, the European Union’s (EU) executive body, said that the average budget deficit of European nations has fallen from 6 percent in 2009 and 2010 to 4 percent in 2011, and is expected to fall 3 percent this year and next.

Beyond that, he said the economic reforms show signs of working, with fiscally troubled Ireland now able to access financial markets, surprising export growth in struggling Portugal, difficult banking reforms approaching passage in Spain, and budgetary progress in Greece, where the deficit has fallen from 16 percent of the overall budget in 2009 to 6 percent this year.

“I am bringing better news from across the ocean,” Rehn said. “I’m convinced that all this hard work will start bearing fruit in the not-too-distant future, and in fact the first signs are already visible.”

However, high unemployment remains a major area of concern, especially among the continent’s youth. Some critics have said that the steps taken so far have focused too heavily on reducing budget deficits at a time when public spending could stimulate job growth and lower unemployment. But Rehn said he believes that healthier governments are key to future economic strength, and that talk of getting rid of the euro so countries can pursue individual cures would mean even deeper economic dislocation and recession.

Rehn made his comments to a packed auditorium and nearby overflow room at the Minda de Gunzburg Center for European Studies. The talk, titled “Rebuilding the Economic and Monetary Union,” was hosted by Kenneth Rogoff, the Thomas D. Cabot Professor of Public Policy in the Faculty of Arts and Sciences’ Economics Department.

“It’s quite extraordinary to have the vice president of the commission here. There’s just a little bit going on in Europe,” Rogoff quipped.

Rehn said that despite the flood of negative news coming from the continent, Europe is stronger than perceived, with a market of 500 million people and a third of the globe’s economic output. As a region, the EU remains the largest trading partner of the United States, China, and many other nations.

In addition, he pointed out, despite the current economic troubles, Europe remains stable and at peace, important factors given the continent’s troubled history.

It is apparent now, Rehn said, that the economic good times after the adoption of the euro in 1999 were wasted. He also said that economic reform, though it may seem severe today in countries that had soaring budget deficits, isn’t something that can be undertaken and finished forever. Rather, it needs to be an ongoing part of a constantly changing economic scene. It wasn’t that long ago, he pointed out, that Germany and other nations considered strong today were experiencing their own crises.

“All those countries had to go through very serious reform of their fiscal policy and structural elements,” Rehn said. “There is never anything eternal in economic success.”

Rehn said he looks forward to a vigorous debate on closer political ties among European nations, which some analysts have proposed as a necessary step to avoid future crises. A more critical issue, given the current crisis, is a tighter fiscal union — provisions of which are outlined in a fiscal treaty signed earlier this year and awaiting ratification — with integrated banking laws, protections against bank failure, integrated economic policy frameworks, and budgetary guidelines aimed at preventing the kind of imbalances among nations that sparked the current crisis.

Rehn said that European and national officials have been forced to work as both firefighters dealing with crisis and as architects designing reforms that will shape future relations between countries, their businesses, institutions, and citizens.

Although some analysts have said that, having weathered the initial crisis, the European nations could focus on plans for the future, Rehn said there are still aspects of the downturn that are ongoing.

“We do have to continue with firefighting for some time to come,” he said.