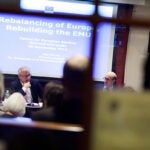 Hope for continental recovery, in 2013

After nearly two decades under house arrest at the hands of Burma’s military regime, pro-democracy activist Aung San Suu Kyi — now a member of the burgeoning democratic nation’s parliament — is in the midst of a long-awaited visit to the United States. At Harvard Kennedy School (HKS) on Thursday, the Nobel Peace Prize laureate and international icon outlined her first goal for her country’s future: educating Burma’s people in how “to be citizens of a free society.”

“We have just started on the road toward shaping our country into the kind of nation that we want it to be,” Suu Kyi told a packed hall. “We want to start out by creating a responsible society. … Freedom and responsibility are different sides of the same coin.”

In 2010, Suu Kyi was released from house arrest, where she had spent 15 of the previous 21 years imprisoned as a result of a crackdown on the country’s 1988 mass demonstrations. Earlier this year, she was elected to the lower house of the Burmese Parliament, and now serves as chair of her party, the National League for Democracy (NLD).

“Despite imprisonment and intimidation, confinement and surveillance, she has stood always for nonviolent opposition, for unity in the face of adversity, for lasting freedom from, in her own words, ‘the enervating miasma of fear,’” said Harvard President Drew Faust, who introduced Suu Kyi. Throughout her time in the international spotlight, Faust added, Suu Kyi has displayed “a serene tenacity that continues to be a defining feature of her leadership.”

That commanding presence was on full display at the John F. Kennedy Jr. Forum, where a rapt crowd gathered to hear Suu Kyi deliver the 2012 Edwin L. Godkin Lecture, the most prestigious endowed lectureship at HKS. In her talk, she detailed the next steps for Burma, where many citizens have no experience of democracy.

“You cannot wait for everything to be done for you,” she continued. “We have had to teach our people in a very practical way” to take responsibility for their actions and choices, she said.

That process began with the 2012 by-elections, where the NLD ultimately won 43 of 44 contested seats. Suu Kyi and the NLD had just six weeks to campaign and to educate distrustful and fearful voters in mostly rural districts.

“We took a simple message to our people,” she said. Surprisingly, turnout reached 70 percent. “They had learned the lesson very well that they had to take part in the voting process if they wished to be considered responsible citizens.”

Now that the NLD is able to govern, she said, the party is focusing on small projects, such as well-digging in rural villages, that give citizens a sense of ownership in their communities.

The country still faces impediments to healthy democracy: human rights violations against religious minorities, the lack of a strong independent judiciary, and the absence of rule of law. For Burma to sustain its democracy, it must address those issues and focus on improving health and education among its citizens, Suu Kyi said.

“Democracy and democratic values have to be embedded in our education system,” she said.

Suu Kyi described her own struggle against the long-ruling military regime in no-nonsense terms. Though she was given a chance in 1998 to end her house arrest if she left Burma, her decision to stay was an easy one, she said.

“I never thought of leaving Burma,” said Suu Kyi, who just this year was able to formally accept the Nobel Prize she received in 1991. “I always thought that as long as there was one person in Burma who still believed in democracy, I had to stay with that person.”

Despite her determination over the past 24 years, Suu Kyi balked at the label of icon.

“I’ve always thought of myself as a politician,” she explained, describing the hard work and discipline required to stay up-to-date on politics during her years of confinement. “From my point of view, icons do nothing except sit there.”

Still, she appeared moved when audience members, many of them international students, said they were inspired by her example (one HKS Mason fellow told Suu Kyi, during the evening’s question-and-answer session, “You are more Pakistani than you realize”).

“It has been a wonderful discovery, this sense of oneness,” Suu Kyi said.

The feeling among forum-goers was mutual. In the words of the event’s moderator, HKS Dean David T. Ellwood, “You may not be an icon in your own words, but you sure are an inspiration.”