A president next door 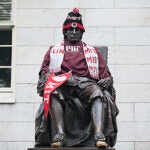 A welcome from John Harvard

Faust lauds Reif at his inauguration as MIT’s leader

At L. Rafael Reif’s inauguration as 17th president of the Massachusetts Institute of Technology (MIT) on Friday, dignitaries from dozens of universities, academic societies, and government agencies were on hand. But only one was there to give remarks on behalf of the academy — and she had traveled a mere 1,797 Smoots from “that red brick school up the street.”

Faust came not only to praise Reif — a longtime engineering faculty member at the institute and an important collaborator on Harvard and MIT’s new online education platform, edX — but also to tease him.

“We at Harvard owe it to MIT never to let us take ourselves too seriously,” she said. To make good on her word, and in recognition of MIT’s long-standing tradition of hacks on the Harvard campus, she presented Reif with “a symbol of our lasting friendship”: a framed portrait of the John Harvard Statue dressed in MIT gear.

The gift provided a moment of levity on a momentous day for MIT and for its neighbor along the Charles. The schools have had a long working relationship, a commitment reinvigorated in recent years by the launch of ventures such as edX and the Broad Institute for research in the biological sciences, Faust said.

“A well-respected and highly successful provost, Rafael Reif is well known to us at Harvard for his insight and his judgment,” Faust said. “He is a generous and genuine convener who listens as much as he speaks — identifying common ground, defining shared purposes, and driving progress.”

In his inaugural address, Reif outlined a vision for MIT’s future that suggested he intends to live up to Faust’s characterization.

As the world faces pressing problems, from poverty and disease to energy and climate crises, “society needs the creative force of its universities more than ever,” Reif said. “In deciding how to respond, universities stand at a crossroads of risk and opportunity.”

That crossroads is marked not just by technological innovations in online learning, but by the growing, likely unsustainable costs of higher education — both for the families of students and for the universities educating them.

“The landscape is suddenly alive with credible, low-cost alternatives,” Reif said of online education. “This represents a great step forward for humanity, a step that we should all celebrate. And I’m really proud that MIT and its edX partners, Harvard and UC Berkeley, are helping to lead this revolution.”

But universities should also be concerned about the effects of technological change on the residential education model, he said.

“The research university is not an ornament or a luxury that society can choose to go without,” he said. “Society continues to need what a residential research university does better than any other institution: incubate young talent who create the new knowledge and innovation that fuel our society.”

If the risks of embracing online learning are formidable, he said, the opportunities are even greater, namely, “the opportunity to better serve society by reinventing what we do and how we do it,” by making higher education more affordable, accessible, and effective.

If the universities’ collaboration on edX is any indication, Harvard has already joined MIT in the game. And judging by the crowd’s reaction to Faust’s peace offering, MIT’s hackers may be ready to call a truce.

“I think you have many newfound friends in the audience,” John S. Reed, chairman of the MIT Corporation and master of the day’s ceremonies, told Faust.