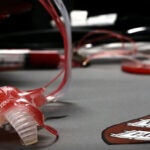 Life finds a way, even when the path is poisonous, toxicologist says

Life evolved in a toxic world long before humans began polluting it, according to a University of Massachusetts environmental toxicologist, who added that understanding life’s evolutionary response to environmental poisons can help people to fight destructive effects.

Emily Monosson, an adjunct professor in the UMass Department of Environmental Conservation and author of the book “Evolution in a Toxic World,” said that an understanding of both how rapidly and how slowly life can evolve to fight toxic pollutants is largely missing from toxicology, which is the science of understanding the effects of poisons on life, particularly human life.

Monosson, who spoke Thursday at Harvard’s Haller Hall in an event sponsored by the Harvard Museum of Natural History, said lessons from our evolutionary past that might help us avoid trouble have been ignored by toxicologists and industry alike.

Monosson said she wrote the book in an effort to get toxicologists to think differently about their field, which she said still uses tools that are 40 years old and badly need updating.

“The basic point of doing this book is to get toxicologists to look differently at our field,” Monosson said. “Toxicology needs to change.”

“Roundup Ready” soybeans offer an example where a better understanding of the rapidity of evolution might have helped, Monosson said. The soybean was genetically modified to be resistant to the herbicide Roundup, which could then be sprayed on soybean fields, where it would kill weeds but not the soybeans. Officials believed that the weeds would not become resistant to Roundup. But after blanket applications, it appears that some resistance is evolving.

Slow evolutionary change also holds lessons for toxicologists and industry, Monosson said. Estrogen receptors help to control the body’s use of the critical reproductive hormone. Some industrial chemicals bond with the receptor, widely disrupting reproduction of an array of creatures.

Estrogen receptors are highly conserved, meaning they are widespread among many kinds of creatures and have changed extremely slowly over time, an indication of their evolutionary importance. An understanding of that importance would have helped officials predict that chemicals interfering with them would have widespread and deleterious environmental effects, Monosson said.

“There’s a lot of problems we could have avoided if we understood the power of evolution in the presence of toxic chemicals,” Monosson said.

It is unknown how humans today will respond to the many chemicals, usually at low levels, that our bodies are carrying. Some of these chemicals may be harmless alone but could have interactions with other chemicals in our bodies, Monosson said.

“Those chemicals in us today weren’t in our grandparents,” Monosson said. “If we take an evolutionary approach to understand how systems evolved to detoxify chemicals, maybe we can learn how to do it [ourselves].”

A toxic Earth is nothing new to life, Monosson said. When life began 3.8 billion years ago, there were poisons all around. Besides the presence of metals and other toxins in the environment, early microbes were bombarded from above. The early Earth had little oxygen in the atmosphere and no protective ozone layer to shield the microbes from ultraviolet (UV) rays.

In response, early life evolved an enzyme, photolyase, to repair the UV damage to DNA. That enzyme, though lost in most mammals, remains widespread in other types of creatures.

Another early example involved oxygen, which is very reactive and on the early Earth acted like a poison. Life has since evolved to handle and depend on oxygen. One strategy evolved to break down hydrogen peroxide, a highly toxic chemical that forms naturally in the presence of oxygen, water, and UV rays. Early life developed an enzyme called catalase to detoxify hydrogen peroxide, accelerating the natural breakdown process from weeks to a fraction of a second.

In the future, climate change promises to alter the range of many creatures, putting them in new environments to which they’ll have to adapt. The ozone hole is exposing creatures to higher levels of UV radiation than they’re adapted to handle. And human-generated pollutants continue to be released into the environment, presenting an environmental challenge for a wide array of creatures.

Some, like Hudson River fish that have evolved to thrive despite the presence of polychlorinated biphenyls (PCBs), will evolve their own solutions, but others may need human intervention to handle an environment whose toxicity is changing much more rapidly than in the past.

“The problem today is that in a blink of time, we changed the Earth,” Monosson said. “We’ve added a lot of new synthetic chemicals and redistributed a lot of natural chemicals.”