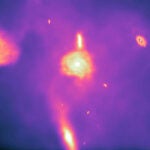 Re-creating a slice of the universe

Having already broken new ground in robotics with the development, last year, of a class of “soft”, silicone-based robots based on creatures like squid and octopi, Harvard scientists are now working to create systems that would allow the robots to camouflage themselves, or stand out in their environment.

As described in a paper published August 16 in Science, a team of researchers led by George M. Whitesides, the Woodford L. and Ann A. Flowers University Professor, has developed a “dynamic coloration” system for soft robots that might one day have applications ranging from helping doctors plan complex surgeries to acting as a visual marker to help search crews following a disaster.

In this video, Stephen Morin, a Post-Doctoral Fellow in Chemistry and Chemical Biology and first author of the paper, discusses the research and demonstrates how the system works.