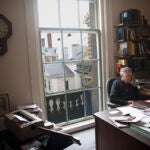 The attendees at Harvard’s 37th annual senior picnic quickly picked up on the theme of the day: Smile.

Longtime Cambridge resident Florence Stanley beamed Wednesday as she chatted with friends at a table under the shade trees in Harvard’s Tercentenary Theatre. She called the event the perfect opportunity to connect with acquaintances new and old.

“We enjoy ourselves, coming out, relaxing, and having fun,” said a youthful looking Stanley, 83. “I smile all the time. Laughter is good, too.”

Cohosted by Harvard and the Office of the Mayor for Cambridge, the event brings seniors from the local community together for a festive afternoon.

Close to 1,000 guests enjoyed a lunch of grilled chicken with tomato-basil relish, herbed pasta salad with tomatoes, plates of juicy watermelon, and chocolate chip cookies. Music for the day included tunes from D.J. Owen and the Never Say Never Band, and a performance of the national anthem by Cambridge Rindge & Latin School junior Heather Bildman. Clad in bright green T-shirts, members of the Mayor’s Summer Youth Employment Program helped to serve lunch and hand out gift bags that included fans and umbrellas.

Christine Heenan, vice president of Harvard Public Affairs & Communications, welcomed the crowd to campus. “We once again have another beautiful day to celebrate Cambridge, to celebrate our senior citizens, and to celebrate the strong partnership between Harvard and the city of Cambridge,” said Heenan, who urged the audience to sign up for Harvard’s email and print newsletters to take advantage of the University’s educational and arts offerings.

“We love having you on campus and being part of the Harvard community.”

Comedian Jimmy Tingle, a Cambridge native, provided plenty of laughs for the lunchtime crowd. Tailoring his routine to his audience, the comic lauded the benefits of aging, noting that “80 is the new 100,” and “the afterlife is the new assisted living.”

Tingle has strong ties to the city’s senior community and to the University. His father was a coordinator with Cambridge’s elder services in the 1970s and ’80s, and Tingle received his master’s in public administration from the Harvard Kennedy School (HKS) and spoke at Harvard’s Commencement in 2010.

Working at HKS with such “inspiring people,” he said before taking the stage, made him “so much more optimistic about the country and about the world.”

On a lighter note, Tingle joked with the crowd that going back to school at the age of 55 had its uncomfortable moments, like his first day when “my mother dropped me off.”

Whether dancing with Cambridge seniors, introducing city and state officials, or helping to lead a singalong, Cambridge Mayor Henrietta Davis was smiling throughout. She called the event a “fabulous tradition” and  “a wonderful welcome by Harvard for our senior citizens.”

Along with Davis, several city officials addressed the crowd, including Jeffrey Young, superintendent of schools. Young thanked Harvard for hosting the festive event and for being “great partners to us in the Cambridge public schools.”

Helen and Jennie Iantosca, sisters and lifelong Cambridge residents, attend the picnic every year. “We love the food, and we love to be here with all our friends,” said Helen.