Student achievement stuck in the middle 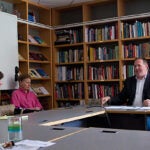 Progress, but no letup

A new study of international and U.S. state trends in student achievement growth shows that the United States is squarely in the middle of a group of 49 nations in fourth- and eighth-grade test-score gains in math, reading, and science over the period 1995-2009.

Students in three countries — Latvia, Chile, and Brazil — are improving at a rate of 4 percent of a standard deviation annually, roughly two years’ worth of learning or nearly three times that of the United States. Students in another eight countries — Portugal, Hong Kong, Germany, Poland, Lichtenstein, Slovenia, Colombia, and Lithuania — are making gains at twice the rate of U.S. students.

The report, “Is the United States Catching Up? International and State Trends in Student Achievement,” is being released by Harvard’s Program on Education Policy and Governance (PEPG). Eric A. Hanushek, Paul E. Peterson, and Ludger Woessmann conducted the study, which is available online. An article based on the report will appear in the fall issue of Education Next and was available today online.

Compared with gains made by students in other countries, “progress within the United States is middling, not stellar,” notes Peterson, Harvard professor and PEPG director, with 24 countries trailing the U.S. rate of improvement and another 24 that appear to be improving at a faster rate. While U.S. students’ performance on the National Assessment of Educational Progress (NAEP) tests improved in absolute terms between 1995 and 2011, U.S. progress was not sufficiently rapid to allow it to catch up with the leaders of the industrialized world.

Rates of improvement varied among states. Maryland had the steepest achievement growth trend, followed by Florida, Delaware, and Massachusetts. Between 1992 and 2011, these states posted growth rates of 3.1 to 3.3 percent of a standard deviation annually, well over a full year’s worth of learning during the time period. The U.S. average of 1.6 standard deviations was about half that of the top states.

The other six states among the top 10 improvers were Louisiana, South Carolina, New Jersey, Kentucky, Arkansas, and Virginia. States with the largest gains are improving at two to three times the rate of states with the smallest gains — such as Iowa, Maine, Oklahoma, and Wisconsin.

The study raises questions about education goal setting in the United States, which “has often been utopian rather than realistic,” according to Eric Hanushek, who cites the 1990 governors’ goal calling for the U.S. to be “first in the world in math and science by 2000” as an example. More realistic expectations would call for states to move closer to annual growth rates of the most-improving states. These gains would, over a 15- to 20-year period, “bring the United States within the range of the world’s leaders.”

International results are based on 28 administrations of comparable math, science, and reading tests over the period 1995-2009. The authors adjusted both the mean and the standard deviation of each international test, allowing them to estimate trends on the international tests on a common scale normed to the 2000 NAEP tests. Student performance on 36 administrations of math, reading, and science tests in 41 U.S. states was examined over a 19-year period (1992-2011), allowing for a comparison of these states with each other. For more information on the study and its methodology, please see an unabridged version of the report, which is available at http://www.hks.harvard.edu/pepg/ and at www.educationnext.org.