Helping hunt for the Higgs 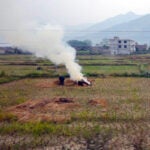 What, exactly, is a Higgs boson?

Fundamentally speaking, explained Melissa Franklin, Physics Department chair and Mallinckrodt Professor of Physics, the Higgs boson is a subatomic particle, one of more than a dozen such particles, including quarks, electrons, muons, and neutrinos.

This particle, however, is unique because its discovery acts as confirmation of the existence of the Higgs field. An invisible area, similar to the electromagnetic field, that permeates all of space, the Higgs field explains how the elementary particles that form the building blocks of all matter have mass. The field works by imparting mass to particles as they move through it. Because some particles move through the field very quickly, they take on less mass. Others, which move more slowly, take on more.

“We believe it is there, but we don’t know for sure that there is a Higgs field,” Franklin explained. “Now that we’ve identified what we believe is a Higgs boson — the manifestation of the Higgs field — the evidence is much stronger that the field is there.”

The potential implications of the Higgs discovery, however, don’t end there.

The particle is also the final puzzle piece in the Standard Model, a theory that explains how three fundamental forces — the strong, weak, and electromagnetic forces — interact to create the physical phenomena in the universe.

“The Higgs was the final piece of the puzzle,” Franklin said. “Now that we have identified a particle that appears to be the Higgs, we have a self-consistent Standard Model that should allow us to ‘write down’ the universe. There are some things that make us think this may not be the final theory — it doesn’t include gravity, for one — but this is an incredibly good description of the universe.”

“If confirmed, this closes one important chapter in our understanding of nature,” said Joao Guimaraes da Costa, associate professor of physics. “In that sense, we are closer to understanding our universe and the physics involved in the early stages of the universe.”

The apparent discovery of the Higgs, announced last week in Geneva, is the result of a decades-long effort to build the 17-mile-long Large Hadron Collider (LHC). The most powerful particle accelerator on the planet, it is used by scientists to smash beams of protons together. Those collisions can recreate the extreme energies generated just after the big bang that launched the universe, when scientists believe the Higgs boson was created. By studying the shower of subatomic particles from such collisions, researchers can identify the characteristic signature of the Higgs.

Harvard’s involvement with the search for the Higgs began more than a decade ago, with Donner Professor of Science John Huth, who led efforts to build — at 38 Oxford St. in Cambridge — detectors to find the particles called muons, essentially heavy cousins of electrons and an important signature in the production and decay of the Higgs.

Huth played a key role in solving a critical question related to the operation of the experiments: how to deliver the computing horsepower to capture and analyze the vast amount of data produced by the experiments.

The solution he and others helped to develop is called “grid computing.” Beginning with Europe’s CERN center as “Tier 0,” data is farmed out to a number of “Tier 1” national or regional data centers, and then on to “Tier 2” centers, typically located at major universities. The final step is to pass data down to “Tier 3” centers, where individual research groups can analyze it. Now the standard for LHC computing, the system has been widely employed by other research groups, including several at Harvard Medical School.

Harvard now is host to both a Tier 2 and Tier 3 center, and stores more than a petabyte of data — equivalent to more than 13 years of high-definition video — on disk and in a large number of computer processing units. Over the years, Huth has also played key administrative roles, overseeing everything from experiments to data analysis and computing efforts, both at CERN and in the United States.

“Our group consists of four professors, seven postdocs, and 10 graduate students,” said Professor of Physics Masahiro Morii. “We even have five undergraduate students working with us. Many of us have everyday responsibilities in operating the experiment and ensuring the quality of the data being recorded. Each of us is also involved in analyzing the recorded data to extract interesting physics.”

While researchers say there is strong suggestive evidence that the newly discovered particle is the mysterious Higgs boson, many were also quick to point out that the results are not yet definitive. According to Guimaraes da Costa, the chances that the particle is not the Higgs are about one in 1.8 million, approximately the same odds that the average person may die in an airplane crash.

“That is a very small probability, but people do die in airplane accidents,” Guimaraes da Costa said. “That explains why we have been reluctant to claim outright that this is a discovery. We instead prefer to call this an observation.”

In the coming months, Huth said, researchers from Harvard and other institutions will continue to run experiments and analyze data with the aim of determining whether the new particle is, in fact, the Higgs.

“The story of the Higgs boson is not finished,” Guimaraes da Costa said. “We are still working very hard, as we speak, to analyze more data. We still need to prove that this is really the Higgs boson and not some other type of particle.

“To do that, we will need at least all the data that will be collected this year, and perhaps more. To collect that data, LHC operation has been extended by three months before the accelerator is shut down for two years to allow for upgrades and improvements. By then, we hope to be in the race for even more spectacular discoveries.”
[vimeo 41038445 w=480 h=630]