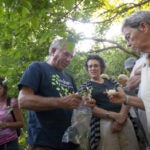 The 20 rambunctious kids gathered at Harvard last Monday looked like typical day campers. But instead of sunscreen and bug spray, their knapsacks contained bamboo cutting boards and measuring spoons. The craft project holding their rapt attention wasn’t a friendship bracelet or macaroni art, but hand-pulled string cheese. And their counselors included none other than Bill Yosses, the White House executive pastry chef, who hovered over students’ workbenches in the basement of the Northwest Lab.

“I’m going to tell Mrs. Obama how great you were today,” Yosses told his charges.

The children, Boston and Cambridge students between the ages of 9 and 12, were taking part in “Kids’ Science and Cooking,” a new program hosted by the School of Engineering and Applied Sciences (SEAS) in cooperation with ChopChop, a nonprofit cooking magazine for kids. An offshoot of the University’s popular “Science and Cooking” course and public lecture series, the two-week day camp is built on the idea that time in the kitchen and the laboratory — both intimidating places to newcomers — is a great opportunity for children to explore their natural curiosity and to learn science, math, and healthy habits, too.

The program’s developers — among them “Science and Cooking” developer Michael Brenner, Glover Professor of Applied Mathematics and Applied Physics, and Naveen Sinha, a doctoral candidate in applied physics at SEAS — had planned an ambitious agenda. In their 10 days on campus, students would learn from scientists, mathematicians, and rock-star chefs about pickling, emulsion, fermentation, and more. They would be responsible not only for making their own lunches, but for prepping ingredients and cleaning up after themselves in the kitchen.

The goal is to “give these kids the tools and empower them to make good decisions,” said Kathryn Hollar, director of educational programs at SEAS, “and to teach that science and math is everywhere. … What’s the boiling point of water and why, what happens when you add salt or sugar, how do you make bread? All these things have science and math behind them.”

“We want to show that our scientists are very curious, and want our young people to be curious too,” she said.

The program has drawn big names in the cooking world, such as Jason Bond of Cambridge’s Bondir, and Yosses, who has helped Michelle Obama with her campaign to promote healthy eating and exercise.

“To use the resources at Harvard to bring kids from all walks of life into this laboratory and teach them about food is an extraordinary opportunity for us and for them,” said Yosses, who helped kick off the program’s opening day.

Also on hand were Somerville cheesemaker Lourdes Fiore Smith, owner of Fiore di Nonno, and Rachel Dutton, a Bauer fellow at the Center for Systems Biology who studies the microbial ecosystems of cheeses. As Smith crumbled fresh curds into a pot, Dutton explained the building blocks of milk (sugar, fat, protein, water) and how they’re manipulated to produce cheese.

A few students looked a bit queasy as Dutton described rennet, an enzyme found in the stomachs of cows and others mammals that is used to coagulate milk and separate curds from whey.

“It’s a special type of protein that carries out reactions,” she said cheerfully. “You can just think of it as this little Pac-Man chomping around.”

Smith slowly stirred warm water into the curds and stretched the now-rubbery mass over her paddle — a process of coaxing out the cheese’s flavor by bringing its butterfat to the surface, she explained.

“Does it have gluten in it?” one student asked, revealing an understanding of gluten formation beyond that of many an amateur baker. “Because I can see that it’s getting stretchy.”

“No, but it has protein, and gluten is a type of protein, too,” Dutton replied.

Instructors passed out a pat of the cheese, sprinkled with salt, to the students, along with a sample of processed string cheese for comparison. As they struggled to pull and twist the cheese as Smith had shown them, a few couldn’t help but taste their own creation.

“I wish the processed cheese looked like this,” one boy said.

“This one tastes awful,” said another, holding up the store-bought cheese. “I should have ate the bad one first.”

The sight of a roomful of kids rejecting processed food for somewhat more adventuresome, straight-from-the-farm fare might sound too good to be true. But Sampson — whose magazine now reaches over half a million homes and pediatricians’ offices — maintains that many kids can develop a foodie sensibility with just a little prodding.

Her advice to parents? “Just get them cooking,” she said. “You don’t have to be a scientist to do these kinds of things with kids. Get your kids involved in the process in any way, and don’t worry if things don’t turn out.”

Natasha Brown of Hyde Park, whose three children are enrolled in the program, called it a godsend for parents looking to keep up their kids’ healthy eating habits and academic interests during the summer. (She had already taken one of her two daughters to Harvard’s Early College Awareness family event in June.)

“As a parent, you want to make sure your child is getting enough vegetables, and you want to find ways to try to help them enjoy it,” Brown said. “They’re growing children, and you want to put a foundation in place now so that as they get older, they’ll have that [impulse] to make more nutritious choices.”

Even the pickiest eater of her brood, Rashad, 9, has yet to voice any complaints about his culinary adventures so far, Brown said.

“He came home yesterday saying he had spinach on his pizza,” she said, laughing. “I couldn’t get him to try it for the world.”