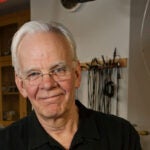 Organic and inorganic materials can remain separate, in a double layer

Researchers at Harvard University and the University of British Columbia (UBC) have provided visual evidence that atmospheric particles — which are ubiquitous, especially above densely populated areas — separate into distinct chemical compositions during their life cycle.

The observations could have important implications for modeling global climate change and predicting air quality conditions. The tiny particles, which form part of an airborne chemical mix above cities, play a role in pollution (by providing a surface for chemical reactions) and in climate (by reflecting and absorbing solar radiation and by acting as seed surfaces for water condensation and cloud formation).

“We’ve confirmed experimentally that changes in relative humidity can separate the organic and inorganic material in individual atmospheric particles into distinct liquid phases, much like oil separates from water,” says UBC Associate Professor Allan Bertram, director of the collaborative research and training program on atmospheric aerosols at UBC and co-principal investigator on the paper.

“Having two liquid phases rather than one can change the rates of chemical reactions on particles, may change the amount of light the particles reflect and absorb, and [may] impact their ability to act as seeds for clouds,” he adds.

“I think of it as [being like] the beautiful phenomenon [that occurred] when I mixed food coloring, water, and vegetable oil in a bottle when I was in grade school,” says Harvard researcher Scot Martin, Gordon McKay Professor of Environmental Chemistry at the School of Engineering and Applied Sciences and the Department of Earth and Planetary Sciences, and co-principal investigator for the study.

“More to the point, this phenomenon is really new thinking in the atmospheric sciences, and it completely changes the way we need to think through the reactive chemistry of atmospheric particles, a key component of urban air quality,” Martin adds.

The air in most urban environments contains particles that are mixtures of organic molecules and chemicals such as sulfates. When examined, samples from Atlanta revealed distinct liquid phases that were qualitatively similar to idealized particles generated in the laboratory. The liquid-liquid phase separation occurs naturally.

Particulate air pollution is a relatively new area of study, but one of growing concern to researchers, health officials, and environmental groups. Increases in the concentration of aerosols are correlated with increased health issues, including cardiopulmonary disorders.

“We need to understand as much as possible about the chemical composition, physical properties, and interactions of atmospheric particles if we’re going to assess how they impact human health, regional weather patterns, and even global climate change,” notes Bertram.

The research was partly funded by the Natural Sciences and Engineering Research Council of Canada through the Collaborative Research and Training Experience (CREATE) program. The research was also funded by the Atmospheric Chemistry Program of the U.S. National Science Foundation, the Atmospheric System Research (ASR) Program of the Department of Energy, and the Pacific Northwest National Laboratory Aerosol Climate Initiative.