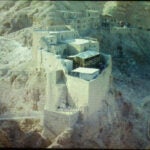 A Harvard scientist is challenging long-held scientific views about the geochemical makeup of the Earth’s mantle, and whether the massive collision that formed the moon affected the chemical composition of the planet close to its core.

In a paper published this month in Nature, Associate Professor of Geochemistry Sujoy Mukhopadhyay presents evidence that the Earth’s deep mantle incorporated gas found in the solar nebula in the first few millions of years of the solar system’s formation. The upper mantle — the layer closest to the crust — was formed later, from material found farther away from the sun. As a result of that separate formation, the two mantle layers — the upper and deep mantle — have fundamentally different chemical makeups.

“The fact that we see gas from the solar nebula in the deep mantle suggests that it was captured by a growing Earth and dissolved into a magma ocean when the planet was largely molten,” Mukhopadhyay said. “Our evidence suggests that chemical layering in the mantle was never subsequently destroyed, an idea which runs counter to views of mixing in the mantle over the intervening 4.45 billion years.”

Though researchers have long understood that the mantle consists of two separate layers, studying the geochemical differences between them has remained challenging, because rocks that move from the deep mantle to the surface are contaminated as they move through the upper mantle and by gases in the atmosphere.

To get around that problem, Mukhopadhyay turned to an unusual technique.

Just as climate scientists study the ancient atmosphere by examining air bubbles trapped in ice, Mukhopadhyay studied bubbles of gas trapped in volcanic rock that originated from the deep mantle. Importantly, he said, the rock samples were collected from a site in Iceland where the rock erupted beneath a glacier, which helped to trap more gas in the rocks and protected the samples from air contamination.

Mukhopadhyay crushed the samples in a vacuum chamber to release the gas bubbles trapped inside the rock, then used the latest generation of mass spectrometer to analyze trace amount of gases released.

Isotopes of neon found in the rock suggest that the deep mantle consists of material collected from the solar nebula in the region where the Earth grew, while gases in the upper mantle, by contrast, come from meteorites that formed farther away. Since the inner part of the solar nebula was dry, the initial stages of Earth’s formation were drier than the later stages.

For decades, researchers have maintained that the moon was likely the result of a collision between the young Earth and a Mars-size protoplanet. The impact also produced a “mixing” effect that eliminated chemistry differences between mantle layers, scientists believed.

Mukhopadhyay’s findings, however, turned up trace amounts of a xenon isotope produced by the radioactive decay of an element found only in the first 100 million years of the solar system’s life span. That such a chemical signature was detected, he said, shows that the deep mantle’s chemical makeup survived over billions of years.

“Since the chemical differences that the Earth inherited as it grew are still preserved in the present day mantle, the moon-forming impact did not mix the earth well, and the chemical signature of the ancient deep mantle survived the giant impact,” Mukhopadhyay said. “While this does not invalidate the impact hypothesis, it suggests some aspects of the giant impact hypothesis will have to be re-evaluated.”

Ultimately, Mukhopadhyay said, his research offers a new view on geologic processes, without which, life would likely not exist.

“Plate tectonics is what makes the Earth unique and different from the inhospitable worlds of Mars and Venus,” Mukhopadhyay said. “Many details about plate tectonic processes, however, remain obscure. This is where the importance of the new measurements from Iceland comes in. This research tells us about mixing rates in the mantle and the exchange of heat, which determines how rapidly the Earth is cooling. It also sheds light on how much mass is exchanged between the shallow and deep mantle and the rates at which the mantle has been losing gases since the Earth formed. In essence, we are learning more about how plate tectonics actually operated through deep time.”