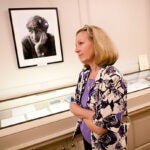 Now, you can sample life in late 19th-century Japan, by cruising online.

“Early Photography of Japan,” a virtual collection of more than 2,000 images from three Harvard University libraries, documents the early history of Japanese commercial photography, and reflects the Western image of traditional Japanese culture before the modernization that occurred during the Meiji period (1868-1912).

Following the resignation of the last shogun, the Japanese emperor proclaimed a new era of Meiji (enlightened rule), and Japan transformed from a feudal society to an industrial and military power. Travel restrictions eased, and photographs became popular with foreign tourists hoping to preserve their experiences of Japan and to document a fading culture.

A fascination with Japan, or “Japonism,” was especially prominent in the Boston area. Local Japonists such as Charles Longfellow, William Sturgis Bigelow, and Isabella Stewart Gardner returned home with thousands of photographs.

“This collection beautifully captures a singular historical moment, and demonstrates the tremendous potential of collaboration among Harvard’s libraries, as well as superb skills of the staff who worked on this project,” said Franziska Frey, head of preservation, conservation and digital imaging for the Harvard Library.

Over time, these hand-colored photographs, exposed to light and pollutants, began to fade and discolor. But since most of the photographs in the collection are mounted in rarely opened albums, the colors appear nearly as fresh and beautiful as when they were applied more than a century ago.