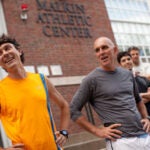 Born to run, and run

A tour of Harvard Forest gave University President Drew Faust glimpses of both the past and the future as she examined a colonial-era farm that is now an archaeological site and viewed experiments investigating the role of climate change in transforming the Earth.

Faust became the first sitting Harvard president to visit the forest in more than 70 years when she and husband Charles Rosenberg, the Ernest E. Monrad Professor of the Social Sciences, last Thursday joined a small entourage that toured the area, led by Harvard Forest Director David Foster.

With 35 undergraduates working there this summer and new research projects starting up — including faculty collaborations and the forest’s designation as part of the world’s largest ecological research program, the National Science Foundation’s National Ecological Observatory Network — there is a lot of activity there this summer, Foster said.

“We have much to show and were delighted to share a beautiful day in our woods with President Faust and Charles,” Foster said.

Harvard Forest, a department of the Faculty of Arts and Sciences, contains 3,500 acres in Petersham, Mass. Set aside in 1907, it is home to just under two dozen resident researchers, and it hosts many faculty and graduate students who teach or conduct experiments on topics ranging from conservation to how humans affect the natural environment.

The group visited the site of Sanderson Farm, inhabited between 1792 and 1829 and the site of an archaeological field school. The visitors viewed experiments probing the effects of climate change on the forest, including a large metal eddy flux tower, which holds instruments above the tree canopy to measure changing carbon dioxide levels, and an experimental stand of hemlock trees that has recently been infested by the hemlock woolly adelgid, an Asian insect introduced in the 1950s that has killed hemlocks from Georgia to Maine.

The visiting group, which included Andrew Richardson, an assistant professor of organismic and evolutionary biology, as well as project directors and researchers, also visited a deer and moose exclusion experiment, which fences out moose — newly returned residents of the state — and deer to understand the impact their browsing has on the forest. Faust heard about student projects, speaking to sophomores Kelsey McKenna, who is conducting research on New England bumblebees, and Anne Cervas, who is measuring decomposition of dead wood and tree regeneration on a recently logged forest plot.