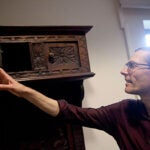 “The Natural History of Edward Lear,” which is on view at the Houghton Library through Aug. 18, can be summed up rather whimsically:

There was once a man named Lear
Who loved the absurd, that’s clear.
But his first love — it’s true — was the London Zoo,
For its parrots, bears, and badgers too.
That patient, penciling, painting, young Lear.

Lear (1812-1888) is best remembered as a master of nonsense in verse, prose, and song. He gave the limerick new life, and along the way created the “runcible spoon,” “the Jumblies,” and the “bong tree.” But Lear was also an accomplished landscape painter and travel writer. Few people know he composed clever melodies, by ear, to play and sing for friends. (Look at the exhibit’s ninth case for a sample of the music — a Harvard thesis in the making, perhaps.)

Even fewer people know that the young Lear was a meticulous painter and illustrator of natural history. It’s a little-explored gap in his life, one that the Houghton show hopes to repair. “This is a relatively unexplored aspect of his career,” said Hope Mayo, the Houghton’s Hofer Curator of Printing and Graphic Arts.

The first-floor exhibit is pegged to the 200th anniversary of Lear’s birth, and was guest-curated by naturalist, writer, and historian Robert McCracken Peck, a senior fellow of the Academy of Natural Sciences in Philadelphia. Thanks to two early benefactors, Philip Hofer ’21 and William B. Osgood Field, the Houghton has the world’s largest collection of Lear paintings. Among the more than 4,000 items are about 200 studies, sketches, and finished paintings related to natural history.

An impoverished child from a large and scattered family, Lear was 15 when he started selling sketches to shopkeepers and coach passengers “for bread and cheese,” he wrote. He combined that enterprise with what he called “morbid disease drawings” for London doctors.

By age 17, Lear was well-known among naturalists at the London Zoo for his precision illustrations. And by 19, he published a gorgeous monograph on parrots, what he said was the first of its kind on a single species. “Illustrations of the Family of Psittacidae, or Parrots” (1832) includes 42 lush and large, hand-colored lithographs of the birds he most loved. (Lear didn’t mind dying and going to heaven, he once said, but would be more comfortable if parrots were there too.)

The monograph did not make the young Lear rich, but it made him one of the most accomplished natural history artists of his era. He influenced two icons of nature illustration, John Gould and John James Audubon, and worked with both.

The Houghton exhibit nicely frames Lear’s golden age of natural history painting (1827-1837). The first of the nine glass cases pays homage to the well-known, portly master of word wit, who often depicted himself as a bird. Look for manuscript examples of his nonsense verse, limericks, illustrated alphabets, and whimsical wildlife. There is also an album of sketches and painting he shared with his sister Ann, 21 years his senior. She not only educated Lear but introduced him to the joy of drawing.

The exhibit’s eighth case contains a glimpse of the mature Lear: the man who moved to Rome in 1837 to pursue landscape painting, and the restless soul who wrote three illustrated books of his travels. Look for his “Journals of a Landscape Painter in Albania” (1851), including a tint lithograph, called “Avlona,” that depicts pelicans arrayed on a sere plain. (Lear, severely nearsighted by then, first thought they were rows of white stones.)

The adventurous Lear was one of the first foreign visitors to remote regions of Albania, and he made art excursions to exotic locales around the Mediterranean, North Africa, and India. (He lived most of his adulthood abroad, and died at his villa in San Remo, Italy, in 1888.) Much of the Houghton collection is landscape studies, which Lear meticulously recorded and filed for future commissions. Most of his landscapes are watercolors, the medium he used in his nature art. But he aspired to oil painting as well. “That’s what got you ahead,” said Mayo of Victorian-era landscape artists, “these large, grandiose oil paintings.”

His transition from nature art to landscapes was, in part, inspired by sketching trips to Ireland and the Lake District in the mid-1830s. But the shift was also practical: Lear’s eyesight was failing fast. In 1837 he told Gould that he had to withdraw from scientific illustration, lamenting that he would soon only be able to draw ostriches.

Lear at ages 15 to 25 had poor eyesight, asthma, chronic bronchitis, epilepsy, and bouts of depression. But he also had the ambition you might expect of a boy scrambling for an income. (Lear, the 20th of 21 children, was born into a prosperous family. But his father, a stockbroker, suffered a financial reversal. By age 4, Edward was living with Ann, who home-schooled him.)

The younger Lear also already had a seed of nonsense and whimsy. The exhibit’s second case, for instance, shows Lear’s fruitful and fundamental connection to the London Zoo. But one of the sketches is a parrot study, which includes one bird studying a rotund zoo visitor.

The same case shows Lear as serious and professional. Every detailed hair is in place in his ink, graphite, and watercolor study of a small animal called the rock hyrax.

The pinnacle of the young artist’s serious pursuit of scientific illustration was his parrot work, which the exhibit lovingly outlines. Plate 7 in his monograph “Red and Yellow Macaw” is among his most famous images. Nearby is Lear’s study for the same final image, complete with brush-stroked swatches of watercolor as he searched for the right tints.

The exhibit’s fifth case, on his dealings with Gould, shows Lear’s fondness for owls, the animals that later appeared so frequently in his nonsense sketches. His “Great Horned or Eagle Owl,” created for Gould’s “The Birds of Europe” (1832-1837), shows the young Lear vividly as he was: a master of the real.

No display of early Lear would be complete without a look at the influences of Lord Edward Stanley, the 13th earl of Derby, who met Lear in 1831. Soon after, Derby commissioned Lear to record the animals in the menagerie at his family estate near Liverpool, Knowsley Hall. (The 170-acre collection, maintained by a staff of 30, eventually included 619 species of birds alone.)

It was at Knowsley too that Lear wrote and illustrated some of his first nonsense poems. “The earl noticed that all the children and the grandchildren of the house were disappearing after dinner,” said Mayo. “They were going down to the housekeeper’s room to hear Mr. Lear recite limericks and draw pictures for them.”

“The Natural History of Edward Lear” continues through Aug. 18 at Houghton Library.