Yielding to an invitation 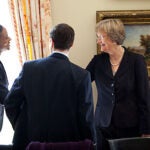 “Three factors combined to increase the yield so significantly: the return of Early Action, the importance of our generous financial aid program in uncertain financial times, and a series of changes enacted over the past decade that greatly enrich the undergraduate experience,” said William R. Fitzsimmons, dean of admissions and financial aid.

Harvard reinstituted Early Action this year after a four-year interval, admitting 774 students to the Class of 2016 in December. Students who apply early have a strong interest in Harvard and often do not apply elsewhere. In addition, offering preliminary financial aid awards to students admitted in December gave reassuring news about Harvard’s affordability.

Harvard’s financial aid program has been significantly enhanced in recent years, providing additional aid to low- and middle-income students. “With the unwavering commitment of Michael D. Smith, dean of the Faculty of Arts and Sciences, Evelynn M. Hammonds, dean of Harvard College, and Drew Faust, president of Harvard University, Harvard has kept its doors open to talented students from all economic backgrounds,” said Sarah C. Donahue, director of financial aid.

Families with incomes from $65,000 to $150,000 and with typical assets pay from zero to 10 percent of their annual incomes, and families with higher incomes can still receive need-based aid depending on individual circumstances, including having multiple children in college or unusual medical expenses.  Students are not required to take out loans, and home equity is not used in determining financial aid.  As always, students are asked to contribute toward the cost of their own education by working 10 to 12 hours per week during the school year and obtaining a summer job.  This coming year, Harvard will spend $172 million on undergraduate financial aid.

Admitted students often noted that their decision to matriculate at Harvard was influenced by the many changes at Harvard in the past decade: a new core curriculum, the program in General Education; a fourfold increase in the number of small freshman seminars; the availability of more than 40 secondary fields of study (minors); the new School of Engineering and Applied Sciences; an augmented advising system that doubles the number of freshmen advisers to more than 400 (and also includes 200 peer-advising fellows and 60 resident proctors); expanded opportunities for close collaboration with faculty through research and regional centers; an arts initiative and revitalized theater opportunities, including Farkas Hall; and many options for study abroad, supported by a $100 million gift from David Rockefeller.

Admitted students were invited to Visitas, which took place from April 21 to 23 with more than 1,300 students and their parents in attendance, a record. The program, directed by Valerie Beilenson and assistant director M. Amelia Muller, enabled students to experience Harvard firsthand, meet faculty and students, and explore Cambridge and Boston.  “We are extremely grateful to all the faculty, students, and staff who made Visitas such a great success,” said Marlyn E. McGrath, director of admissions. “We also want to thank our 15,000 alumni/ae who telephoned, emailed, and hosted gatherings for our admitted students in locations around the nation and the world.”

This year’s high yield means that only a small number (about 25) will be admitted from the waiting list.  In recent years, this number has ranged from zero to 228.

Harvard’s yield is particularly notable because the College does not offer athletic or other non-need-based scholarships.  In addition, Harvard’s Early Action program, unlike binding Early Decision programs, allows admitted students to apply elsewhere and asks only that they reply by May 1 after comparing other offers of admission and financial aid.  Such freedom and flexibility allow a student more time to choose the college that provides the best match, a contributing factor to Harvard’s nearly 98 percent graduation rate.

“The Class of 2016 was chosen through the most selective admissions process in Harvard’s history,” said Fitzsimmons.  “They have enormous potential in every way that is measurable. But most of all, they demonstrate the intangible strength of character that Harvard has sought since its founding in 1636. We look forward to following their progress over the next four years and beyond.”