Straight to the source 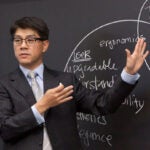 Harvard scientists are using a powerful statistical tool to not only track sea level rise over time, but to determine where the water causing the rise is coming from.

As described in an April 23 paper in the Proceedings of the National Academy of Sciences (PNAS), graduate students Eric Morrow and Carling Hay have demonstrated the use of a tool called a Kalman smoother to identify “sea level fingerprints” — telltale variations in sea level rise — in a synthetic data set. Using those fingerprints, scientists can determine where glacial melting is occurring.

“The goal was to establish a rigorous and precise method for extracting those fingerprints from this very noisy signal,” Professor of Geophysics Jerry Mitrovica, who oversaw the research, said. “What Carling and Eric have come up with is very elegant, and it provides a powerful method for detecting the fingerprints. In my view everyone is soon going to be using this method.”

At the heart of the new technique is the idea, first proposed by Mitrovica and others more than a decade ago, that variability in sea level changes amount to a “fingerprint” researchers can use to identify the source of water pouring into the oceans.

With many people unconvinced about the effects of climate change, Mitrovica proposed the fingerprint idea as a way to refute the argument that melting ice sheets would cause a uniform sea level rise, “like what you see when you turn on the tap in the bathtub — it all goes up uniformly,” he said. Skeptics have pointed to records that showed levels rising in some areas and dropping in others as evidence that man-made climate change is a myth.

But that variability is exactly what researchers expect to see, Mitrovica said.

“As ice sheets around the world melt, there is an extremely variable effect on sea level,” Mitrovica said. “That variation is actually very beautiful — it has information embedded in it. By looking at the differences in sea level changes around the globe, we should, in principle, be able to determine if the changes are the result of melting in Alaska, Greenland, Antarctica, or elsewhere.”

That variation in sea level change is the result, in part, of the sheer size of the ice sheets, which are so massive they draw water to them, creating their own tides. Though a melting glacier can dump millions of gallons of water into the ocean, it also reduces the size of the ice sheet, relaxing that tidal effect. The “highly counterintuitive” result, Mitrovica said, is that while sea levels rise in some parts of the world, within 2,000 kilometers of the ice sheet, the melting would cause sea levels to drop.

“There are other effects as well — close to the ice sheet the sea floor rebounds a bit because it has less mass on top of it,” Morrow said. “What’s interesting is that the pattern of sea-level change will be different for each and every ice sheet — and that is why these patterns have come to be known as sea level fingerprints.”

However, while scientists have been able to model the fingerprint associated with each ice sheet on the globe, the far trickier question is how much each contributes to the current picture of rising sea levels.

“The challenge in doing that is that the ocean is a noisy place,” he continued. “We’re talking about identifying very small signals and separating them from the waves, the changes in salt content, circulation changes, the temperatures effects, and more. What Carling and Eric have developed is a way to detect these fingerprints in the sea level variations that we observe with tide gauges and satellites, and their method takes into account the fact that those variations may change over time.”

To test the new tool, Hay and Morrow created a data set of hundreds of sea level records, then added the type of noise seen in real-world data. Such tests against “synthetic” data are a typical first step, Mitrovica said, to ensure that statistical tools work.

As described in the PNAS paper, the tool they developed was able to consistently identify fingerprints in the synthetic data, and tease out how much each was contributing to the rise in sea levels worldwide.

The next step, Mitrovica said, will be to test the tool against real-world data. That work is ongoing, and will be published in a forthcoming paper.

Though it is clearly a powerful way to highlight the continuing problem of glacial melting, Mitrovica said the ultimate power of the tool might lie in bringing to light the true costs and dangers of sea level rise.

“We need to get the person living on the Maryland coast to understand that the sea level change they will observe in their area will depend on which ice sheets are melting and by how much,” he said. “When I give public talks, one of the questions I’m invariably asked is ‘Where should I buy property?’ It’s tongue in cheek, but it does belie a certain sense that this is going to hit home.”