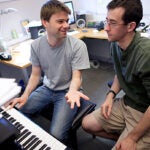 The Islamic art and architecture community mourned the loss of one of the field’s most influential and insightful scholars. Oleg Grabar, professor emeritus of the School of Historical Studies at the Institute for Advanced Study, and Aga Khan Professor, Emeritus, at Harvard University, passed away at his home in Princeton, New Jersey, on January 8, 2011, at the age of eighty-one. Professor Grabar, who taught in the Harvard Department of Fine Arts (now History of Art and Architecture) for twenty-one years (1969–1990), was instrumental in founding Harvard’s Aga Khan Program for Islamic Architecture. There are few, if any, Islamicists who have not profited from the scholarly contributions of this extraordinary man, who was larger-than-life. He was the first Aga Khan Professor of Islamic Art at Harvard (1980–1990), and subsequently joined the faculty of the Institute for Advanced Study in Princeton, where he remained active in research and publication until his second retirement in 1998, and over the following thirteen years as well. Grabar’s continuing post-retirement intellectual productivity and capacity to inspire were officially recognized when he received the Chairman’s Award from the Aga Khan Award for Architecture in Doha in 2010.

Oleg Grabar was born in Strasbourg, France, in 1929. As the son of André Grabar, the eminent historian of Byzantine art, he was raised almost from the cradle to be an art historian. Thanks to that upbringing, he harbored a special fascination with the Byzantine and late antique heritage of the Mediterranean world. This fascination extended to his explorations of early Islamic art at the beginning of his career, with seventh- to eighth-century Umayyad architecture forming the core of his scholarship, even when it broadened later on to embrace a much wider spectrum.

In 1969, Grabar joined the Harvard faculty as Professor of Fine Arts and was the first ever to teach Islamic art at the University. Always generous to students and colleagues, he was also a thoughtful faculty member of the Center for Middle Eastern Studies. His wide-ranging and substantial knowledge of the Middle East — not only its art and architecture but also its peoples, cultures, and history — gave him a magisterial perspective on possibilities for lecturers, projects, and thematic emphases for Center programs. As a teacher, he would mesmerize students with his flamboyant, exciting, and always substantive lectures. His remarkable charisma derived largely from his contagious enthusiasm for challenging intellectual problems and for the subject matter and questions he was addressing at any given time.

Grabar wrote more than 20 books and 120 articles. He was primarily a medievalist, but his publications covered a wide range of subjects, including early Islamic architecture, the architecture of Jerusalem under Islamic rule, Arabic and Persian painting, and Islamic ornament. Among his best-known books are “The Formation of Islamic Art” (1973), “The Illustrations of the Maqamat” (1984), “The Art and Architecture of Islam 650–1250” (co-authored with Richard Ettinghausen, 1987), and “The Shape of the Holy: Early Islamic Jerusalem” (1996).

Grabar’s seminal work, “The Formation of Islamic Art,” is perhaps the masterpiece among his innumerable publications and remains a classic. This sophisticated and inspired work grew from his early studies on the origins of Islamic art. In one obituary, it was judged “more a work of cultural than art history,” springing as it does “from a deeper familiarity with the thought-world of early medieval Islam than any of today’s Islamic art historians possess,” and revealing that he was “more interested in ideas and context than in the close-focus study of surface detail or indeed the objects themselves as works of art.” Grabar prided himself precisely on this methodological approach. He succinctly distinguished his approach from that of Professor Ettinghausen — a contemporary luminary in the field, whom he admired and collaborated with in the preparation of their highly influential survey of Islamic art and architecture — in the advice he gave to one prospective graduate student: “If you wish to start with ideas and then choose relevant objects, come here to Harvard; but you should go to the Institute of Fine Arts if you prefer to move from objects to ideas.”

The global reach of Grabar’s scholarly achievements had an impact not only on his own field but far beyond as well. He had a very special talent for making Islamic art and architecture seductive to nonspecialists, thereby vastly broadening the recognition of the field. He boldly posed sweeping questions about the nature, meaning, and dynamics of Islamic art at a time when very little was known about this subject. In addition to cultivating world-class advanced scholarship and research in the field of Islamic art, he asked questions that often challenged Euro-American perspectives more generally.

Grabar’s creative approaches made the field appear wide open to hugely exciting questions of cultural and social history and aesthetics, captivating the minds of generations of scholars and amateurs alike. His mental agility and nondogmatic flexibility made him an extraordinarily inspiring mentor. He would encourage graduate students to work on entirely unexplored subjects because he was deeply concerned about shaping the parameters of a field whose rapid expansion both pleased and worried him.

Grabar trained scores of students, many of whom went on to become leading scholars, educators, and curators around the world, particularly in the United States. He brought passion and vision to his work, and his expansive personality, generosity of spirit, collegiality, conviviality, and humor were truly infectious.  Grabar’s resounding impact on expanding the scope of the Islamic field far beyond its former spatial and temporal limits will be his lasting legacy.

Oleg Grabar is greatly missed and the field will not be the same without him.