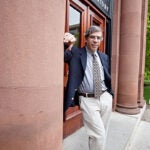 The whys of religion vs. evolution

Though the illegal trade in rare or endangered plants and animals is estimated to be worth billions of dollar, efforts to combat such wildlife crime are spotty at best. In many nations where the trade is most lucrative, there is little money to devote to enforcement, and punishments border on nonexistent.

Those working to combat the illegal wildlife trade, however, could soon have a powerful new tool at their disposal, courtesy of Harvard University.

Work is under way to integrate WorldMap, an open-source online application developed by Harvard’s Center for Geographic Analysis (CGA), with the Wildlife Enforcement Monitoring System (WEMS) of the United Nations University Institute of Advanced Studies (UNU-IAS).

Once complete, the system will allow anyone — from curious members of the public to national policymakers — to map and track wildlife crime,  and to understand how it is related to a host of socioeconomic data — such as ethnicity, income, and environmental conditions — already included in the AfricaMap layers of WorldMap.

“I think there are three areas where this will have some impact,” said Wendy Guan, director of GIS Research Services at CGA. “The first is with a public-facing site that will allow the UNU to put their data in visual form, giving them an opportunity for more public awareness and education.

“Perhaps more important is how the system can be used by policymakers,” Guan continued. “Because users can view multiple ‘layers’ in WorldMap, they’ll be able to see how some demographics interact, and do very in-depth analyses. They’ll be able to see whether economic conditions correlate with the frequency of violations, whether crime goes up if there’s a drought or other environmental conditions. That will help them identify patterns that might be addressed through policy changes or other actions.”

Guan expects the new system to assist law enforcement agencies combatting wildlife crime. The goal, she said, is to simplify the system for reporting crimes by allowing people to enter data rapidly, which can instantly be added to maps to check its accuracy.

Though first discussed several years ago, the notion of adding a mapping capability to the Wildlife Enforcement Monitoring System didn’t gain traction until last year, when the CGA released WorldMap. Hoping to merge the software with their system, UNU staff contacted Harvard. Late last year, the two sides signed an agreement that spelled out how the two systems will be integrated, the technical assistance that Harvard will provide, and the new features that might eventually be added to the integrated system.

“By merging Harvard’s WorldMap with WEMS, the enhanced system will be able to provide a socioeconomic angle for users, which was missing in the original database,” said Govindan Parayil, UNU vice-rector and director of the Institute of Advanced Studies. “The integrated system will be a vital tool for not only those in wildlife management, but also for researchers and policymakers looking for economic, social, and geographic data across Africa. This is precisely the kind of interdisciplinary approach and bridging function between research and policymaking that UNU aims to undertake.”

Once up and running, Guan said, the new system will allow users to “slice and dice the data to see whatever you want.”

“That’s the idea. It’s more than just a map per se,” she said. “It’s a database, it’s a user interface. It allows you do to do analysis, not just put the data on a map and be done with it.”

“Preserving Africa’s rich flora and fauna, while also providing the means to analyze and better understand these natural forms in relationship to socioeconomic, environmental, and other data, is an important part of our broader mission,” said Suzanne Blier, the Allen Whitehill Clowes Professor of Fine Arts and professor of African and African-American studies and AfricaMap’s co-chair. “This system will be a powerful tool for visualization, but it’s also an avenue for data creation, and for data re-engagement. Suddenly, users aren’t looking at this solely from the vantage point of the political issues or the legal issues, but thinking about a broad array of different ways in which these factors are engaged with the environment.”