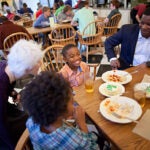 20th anniversary of festival a feast of dance, music, theater

Most birthday celebrations don’t include 100 music, dance, theater, and multimedia events in a dozen venues featuring more than 1,000 performers.

But then, this was no ordinary birthday.

It was the 20th anniversary of Harvard’s Arts First festival, presented last weekend by the Office for the Arts at Harvard (OFA) and the Office of Governing Boards. And without a doubt, there was something for everyone.

At Widener Library, the Harvard Spinnerets, led by visiting scholar Sarah Kariko ’90, invited the rare spider Hyptiotes veritas to come spin her triangular-shaped web to celebrate 375 years of arts and veritas. Passersby were then invited to write their own truths on “veritas ribbons” and weave them into the web.

At night, “Slow Dancing,” a video installation by David Michalek, was projected on the library’s façade, drawing crowds awed by the mesmerizing sight of bodies whirling, twirling, and kicking in hyper-slow-motion. Facebook and Twitter comments summed up the experience: “Beautiful”; “a perfect contemplative period”; “nothing short of breathtaking.”

“The energy from all the performers is so tangible,” said senior Emma Chastain. “It’s wonderful to see dancers from all different groups — from the Ballroom Dance Team to ballet and bhangra — performing in the same place.”

Classical music enthusiasts crowded Holden Chapel and Paine Hall for conservatory-caliber performances. Freshman George Ko, a member of the Harvard Piano Society, remarked, “To see so many people excited about the arts and sitting on the edge of their seats to hear the music being made by fellow students was truly a rewarding experience.”

Another freshman, Sarah Reid, enthused about the Student Art Show and Sale at 90 Mt. Auburn St., as well as an exhibition at the Adams House Art Space. “Going to the various art shows was very inspiring; I had no idea that my friends and peers were creating such high-quality work,” she said. Reid performed with her R&B cover band, The Nostalgics, on an outdoor stage in Harvard Yard. “What an incredible way to wrap up my first year! The art we’ve been creating over the past few months was showcased and garnered a lot more appreciation through the festival.”

Theater fans were treated to an array of productions, from “Hansel and Gretel” and “Hair” to original student works such as “Highway 9” by Kristi Bradford ’12, “Hart Crane” by Matt Aucoin ’12, and “The Graveyard Book” by Elizabeth Mak ’12. Said Dana Knox, production coordinator of Farkas Hall: “What a whirlwind — it was a spectacular cross section of genre and content.”

“Harvard isn’t thought of as a school that turns out major figures in the performing arts,” said Brianne Holland-Stergar ’13, who played Gretel. “Performing as an undergraduate in front of someone as accomplished as Tommy Lee Jones reminded me that Harvard can and does turn out exceptional artists.”

Arts First also recognized the increasing presence of art making in the curriculum. On Friday at Arts @ 29 Garden, “Breaking Boundaries” showcased collaborative projects, presentations, and performances by students led by faculty who received grants from the Elson Family Arts Initiative.

“The event far exceeded our expectations,” said Bess Paupeck, Arts @ 29 Garden program manager. “The constant flow of student performances, exhibitions, and faculty presentations, as well as the many people who witnessed it, was jaw-dropping and inspiring. Especially in the midst of Arts First, it was a clear statement that creativity and art making are gaining traction in the curriculum.”

At the Memorial Church, students performed Heinrich Schutz’s “The Seven Last Words,” a piece that was part of the class Music 123r, “Passion Settings in the 20th and 21st Centuries,” taught by conductor Andrew Clark, senior lecturer in the Department of Music and director of choral activities at Harvard.

“This class gave me a great appreciation for music,” said tenor Adrian Aldaba ’12. “It let me look at music in ways I never thought I would, such as the political impact of music.”

On Sunday at Agassiz Theatre, students performed work by Harvard-affiliated poets such as T.S. Eliot, Wallace Stevens, Adrienne Rich, Robert Frost, and Elizabeth Bishop. As conceived by Professor Jorie Graham, a Pulitzer Prize-winning poet, the show was a moving testament to the sheer beauty and power of the written — and spoken — word.

“We are so thrilled to be marking 20 years of Arts First, and I particularly love the forward motion of this year’s festival,” said OFA Director Jack Megan. “We’re acknowledging not only the wonderful history of Harvard arts with events like the poetry reading, but also a taste of things to come with ‘Breaking Boundaries’ and ‘Slow Dancing.’ Of course, the students are the engine of this festival. Their work comes straight from the heart, and so much of it is truly exceptional.”