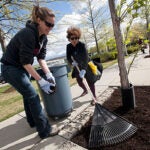 Eleven-year-old Luke Black stood on a ladder in the Harvard Allston Education Portal with a paper cup in one hand and another cup taped to string and bright-orange tissue paper in the other. A circle of parents and children pushed forward to get a better look.

Addressing his audience as if he were a scientist, Black said, “Here is how it works: The air resistance keeps things from falling really quickly.”

He dropped the cup. Then, he released his handmade parachute. The orange paper billowed out and the second cup slowly sank to the ground. Black continued his demonstration, launching a rainbow of parachute cups and sharing his observations of the performance of each to the gathering crowd.

“He doesn’t need my help any more, I’m in the way now,” said Ed Portal mentor Tri Huynh ’13, as he proudly stood by his mentee.

Huynh is the Harvard College junior who worked with Black for the past 10 weeks to develop dozens of parachutes of all shapes, sizes, and materials to test their impact on air resistance and discuss basic laws of physics.

The demonstration was just one of more than 20 featured presentations by mentees in science, math, and writing that engaged and informed those gathered at the Harvard Allston Education Portal on April 29 for the end of the semester “Showcase.”

The event drew nearly 100 people, including Ed Portal mentors, the Allston youngsters they’ve worked with, family members, and Harvard faculty and staff, to celebrate the conclusion of yet another semester of learning.  Both mentees and mentors demonstrated the special connections that form at the Ed Portal and how contagious the excitement of learning can be.

Since 2008, the Harvard Allston Education Portal has fostered learning and exploration between the Harvard and Allston-Brighton communities.  But this particular “Showcase” offered something special.

Visitors were treated to a preview of the Ed Portal Annex, a new flexible space that will triple the size of the Ed Portal, allowing it to extend beyond its hallmark mentoring program to add new academic, recreational, and cultural programming.

“The Ed Portal is meant to be a doorway through which the Harvard and the Allston-Brighton community can come together to share the excitement of learning — and now the Annex has expanded the doorway even further,” said Lue, professor of the practice of molecular and cellular biology and director of Life Sciences Education at Harvard.

“With this much larger, extremely flexible space, we can explore new activities involving the arts, social sciences, literature, and recreation and provide new kinds of meaningful interactions for families, adults, and children in the community,” he said.

With that, it was Harvard’s turn for demonstrations. Lue led everyone through new double doors into a massive multicolored exhibition space, which prompted a chorus of “wows” and “cools” behind him.

Visiting scholar Benny Shilo, a Radcliffe Institute fellow and professor of molecular genetics at the Weizmann Institute of Science in Rehovot, Israel, introduced a temporary photo exhibition, where pairs of scientific and human images are employed as metaphors for the underlying concepts of embryonic development.

“This is like a blank canvas,” said Allston resident Greg Lyons after the presentations. Lyons brings his daughter, Nora, to the Ed Portal for weekly science mentoring. “There is a lot of potential here.”

With the Annex’s expansive, flexible space, the Ed Portal will offer new opportunities to develop and enrich the “whole person” through meaningful recreational, artistic, and leisure activities for all ages that connect Harvard and the community, said Lue.

The Annex officially opened in May with an activity area that included board games, an art gallery, and the forthcoming addition of seven holes of educational mini-golf.  The Annex will hold special events throughout the summer, with additional Annex programming launching this fall.