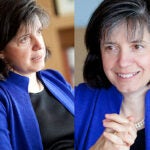 In 1642, there were just nine graduates, and in other years even fewer

The date most associated with Harvard is 1636. It was on Oct. 28 of that year that the Massachusetts Bay Colony created the first institution of higher learning in the English New World.

The gathering of immigrant Puritans described the school’s nearly imaginary creation in “New Englands First Fruits,” a 1643 publicity tract composed for the colony’s London backers. The new College, a “first flower in their wilderness,” was intended to prevent “an illiterate ministry,” the authors wrote, “when our present ministers shall lie in dust.”

So why not call 1639 the most significant date? It was on March 13 of that year that the “Colledg at Newetowne,” 8 months old, was renamed Harvard. Just six months before, John Harvard, a Cambridge-educated minister living in Charlestown, had died at age 30. He bequeathed to the college 320 books and the princely sum of 779 pounds, 17 shillings, and two pence. To put that money in perspective, two decades later, the nearly penniless College gratefully recorded a gift of cotton worth nine shillings, along with a pewter flagon, a fruit dish, and a sugar spoon.

Bear in mind the plebian source of John Harvard’s wealth. It came from his father and two stepfathers, who were, respectively, a butcher, a cooper, and a grocer. John Harvard himself had a sort of magical literary provenance. His parents, Robert and Katherine, were introduced by William Shakespeare.

Or why not call 1642 Harvard’s primal year? It was then, in September, that the College held its first Commencement, graduating nine seniors. At least three soon crossed the Atlantic the other way, one to serve as a diplomat for the rebellious Oliver Cromwell and another to study medicine in Italy.

Reverse migration was a concern; educated young men still felt the tug of Mother Europe. Of Harvard’s first 20 graduates, 12 moved to Europe, and only one returned. There was also a shortage of College entrants — teenage boys proficient in Latin and Greek who, once admitted, were willing also to take on Hebrew, Chaldee, and Syriac. During the rest of the 17th century there were no Harvard graduates in five of those years. In two others, 1652 and 1654, there was only a single graduate.

In the Commencement of 1642, there was little that we would recognize today, other than that the ceremony opened with a staff being struck on the floor and was interrupted by copious eating and drinking. Exercises were conducted in Latin, including public “disputations” meant to illustrate a student’s grasp of ancient languages.

Starting in 1642, in imitation of Old World universities, candidates for a bachelor of arts (A.B., or Artium Baccalaureus) posted broadsheet academic statements representing the scope of their work: theses, pro virile defenendae they were prepared to defend the morning of Commencement. Candidates for a master of arts (A.M., or Magister Artium) posted Quaestiones pro modulo discutiendae, single questions in logic, mathematics, or other fields that they answered that afternoon in the affirmative or negative.

No one received a diploma, a tradition that started in 1813. If you wanted one, you paid a calligrapher to design and draw it. And class rank? That was set within a few months of your freshman year, based on the social standing of your parents. (After 1772, the names of graduates were listed alphabetically.) No honorary degrees were awarded until 1692, and the first for accomplishments outside of academics was bestowed in 1753. It went to Benjamin Franklin.

At Harvard’s first Commencement, there were other stark differences. In 1642, Massachusetts Bay Colony settlements extended less than 30 miles along the Atlantic coastline and fewer than 20 miles inland. Harvard itself consisted of just two buildings along the southern edge of a cow yard. The “college,” tucked behind Peyntree House, where the first classes were held, was an E-shaped frame structure of complex jogs and gables. “Very faire and comely within and without,” and “too gorgeous for the wilderness,” observers wrote. It stood approximately where Grays Hall is now. To imagine the first Commencement, stand there. But add to your reverie the fact that nearly everything you hear is in Latin, except at meals; that the prayer hall is next to the buttery; and that Harvard made its own beer. Bring a halfpenny for every quart.

In those days too, wolves still prowled what is present-day Cambridge Common. Beyond what is now Linnaean Street was a howling wilderness, a Grimm Brothers gloom hovering at the edge of fairy-tale Harvard. The barrier of forest and beasts was so daunting that it took the Puritan founders of Cambridge another century to spread their settlement as far north as present-day Rindge Avenue, a mile from Harvard Square.

All around was “unexplored wilderness — extending over … fragile dwellings its fear-inspiring shades,” wrote historian Josiah Quincy III of the College’s first years. “In the night,” added this Harvard president (1829-1845), “slumbers were broken by the howl of the wild beast, or by the yell and the warwhoop of the savage.” Contemporary feelings and fears were laid bare in “New Englands First Fruits,” whose first page says of Native Americans, “our very bowels yerning within us to see them go downe to Hell by swarms without remedy.” About 30 years after Harvard’s first Commencement came the violent King Philip’s War, in which 12 colonial towns were destroyed and 10 percent of white men of military age were killed, along with untold Native Americans.

But just south of the College in 1642 was spread a pleasing footprint of civilization. Cambridge, the first planned town in New England, was a neat grid of streets, curving in one place only because a stream gave Crooked Lane (now Holyoke Street) its name. Near the corner of present-day Winthrop and J.F.K. streets was a wharf for ocean-going ships. They sailed up the tidal Charles River, then glided north along a dredge-deepened creek. Until nearly 1830, timber was off-loaded there from a Harvard-owned forest in Maine, harvested so student rooms could be heated in winter.

Harvard sold its interest in the timber ship shortly before another auspicious date in the history of Commencement: 1836, when the college marked its 200th year, and when Harvard first consciously celebrated itself. Before then, finances and the restraining modesty of Puritan tradition made such celebrations unlikely. Consider, for instance, 1736, when Harvard could have celebrated its first hundred years, a numerical moment that today universally prompts remembrance and rejoicing. The College’s earliest historian, Benjamin Peirce, skipped over the date entirely.

And new rules of that era were promulgated “for reforming the Extravagancys of Commencements,” a contemporary wrote. Liquor was banned, along with plum cake, boiled and roasted meats, “Pyes of any kind,” and “unsuitable and unreasonable dancings.”

By 1836, “dancings” were a joyful fixture at Commencements, and lasted through most of the 20th century. Today, it’s hard to imagine squeezing 20,000 Harvard celebrants onto any dance floor, even to mark a 375th anniversary. Still, they could give dancings a try. Just keep an eye out for wolves.