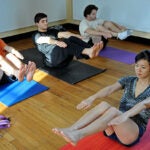 The Class of 2012 will hear from one of popular culture’s rising stars and get a window into the way Washington works when “Saturday Night Live” (SNL) cast member Andy Samberg and Massachusetts Congressman Barney Frank speak on Senior Class Day, May 23, in Tercentenary Theatre.

“Mr. Samberg’s impressive and multifaceted work has entertained the Class of 2012 throughout our time at Harvard,” said DaSilva. “We are excited to hear from one of SNL’s most talented and hilarious cast members. Congressman Frank has been one of the most important voices in Congress for a generation now. The contrast between them will make for a memorable afternoon.”

Samberg, the Senior Class Day guest speaker, is in his seventh season as a cast member on NBC’s long-running late-night sketch comedy show “Saturday Night Live.” Samberg’s “SNL Digital Shorts” have become YouTube sensations and have garnered hundreds of millions of views. His satirical music videos earned him an Emmy Award for best original music and lyrics in 2007, as well as Emmy nominations in 2009, 2010, and 2011.

Along with his Lonely Island partners Akiva Schaffer and Jorma Taccone, Samberg teamed up with pop music icons Justin Timberlake, Nicki Minaj, and Rihanna for the 2011 comedy album “Turtleneck and Chain,” which was nominated for a 2012 Grammy Award. The Lonely Island’s first album, “Incredibad,” was the top-selling comedy album of 2009 and 2010. Samberg recently wrapped production on the film “That’s My Boy,” which stars SNL alum Adam Sandler, opening June 15, and “Celeste and Jesse Forever” opposite Rashida Jones, in theaters in August.

Frank ’61, the day’s alumni guest speaker in honor of Harvard’s 375th anniversary, has represented the 4th Congressional District of Massachusetts since 1980. In 2010, as chairman of the House Committee on Financial Services, Frank helped author and pass landmark reform of the nation’s financial system in the wake of the 2008 global credit crisis. The Washington Post called the law ���the most sweeping overhaul of the nation’s financial regulatory system since the Great Depression.”

“Congressman Frank’s career in the House of Representatives speaks for itself,” said DaSilva. “His leadership and courage have made him one of America’s most important policymakers, and we are eager to learn from one of Harvard’s most distinguished graduates.”

During his 30 years in Congress, Frank has helped to bring commuter rail services to Massachusetts’ south coast, supported the development of affordable rental housing, and worked to strengthen many local organizations and businesses. Frank is also known for his work on behalf of New Bedford’s fishermen.

An opportunity for the College’s senior class to come together one final time before graduation, Class Day ceremonies will take place from 2 to 4:30 p.m. on the day before Harvard’s 361st Commencement. In addition to Samberg’s and Frank’s addresses, the afternoon’s festivities will include the Ivy and Harvard orations, a speech by Dean of Harvard College Evelynn M. Hammonds, and an evening concert by the Radcliffe Choral Society, the Harvard Glee Club, and the Harvard University Band. For more information on Commencement, including its schedule, visit the Commencement Office website.