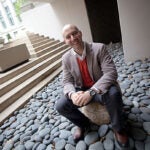 In the startup world, failure is often worn as a badge of honor. But it’s usually not the path to Harvard.

Andrew Rosenthal isn’t your average student, however. Two years ago, he arrived at Harvard Business School (HBS), not from the world of consulting or finance, but fresh off the implosion of his first online business venture. He wasn’t looking for a ticket to a Fortune 500 firm.

“I came here because I wanted to build things,” said Rosenthal, 28. “And I didn’t want to wait until I left to do it.”

What Rosenthal helped to build at HBS wasn’t another company, but a newly energized community of entrepreneurs on campus. While the Business School has long nurtured enterprising M.B.A.s (roughly half go on to found companies within 15 years of graduating), student interest in startup culture has exploded in recent years. And wherever you turn, one name seems to pop up: Rosenthal.

“The way he’s integrated the Boston tech community into Harvard, and Harvard into the Boston tech scene, is very unique,” said Jeff Bussgang, a senior lecturer at HBS and a general partner at the venture-capital firm Flybridge Capital Partners. “I’ve never seen a student do that, ever.”

Rosenthal, who grew up in Portland, Ore., had long been interested in the intersection of business, technology, and health. After graduating from the University of Pennsylvania with a degree in health policy and bioethics, he stayed on to work with noted psychologist Martin Seligman at Penn’s Positive Psychology Center.

In 2008, building off of Seligman’s research, Rosenthal and colleague Doug Hensch launched Happier.com. The consumer health site, billed as “a personal trainer for your happiness,” secured 50,000 users and $1 million in funding in its first year. Soon, however, Rosenthal’s mentors began warning him that Happier.com was on shaky financial footing.

“It wasn’t until Dec. 16, 2009, watching a video of myself airing on CNN talking about the company — and knowing full well that that night we’d have no money left in the bank — that I really got it,” he recalled. “I knew there was so much I needed to learn.”

Two weeks after his company went bust, he flew to Portland to take the GMAT, then scrambled to make the January application cutoff at HBS.

“My parents knew I was serious when everyone was going skiing, and I was like, ‘No, I need to stay here and study and write essays.’ ”

Early in his first year at HBS, he met Jess Bloomgarden and Dan Rumennik, two fellow M.B.A. students who shared his “impatient, optimistic enthusiasm” for entrepreneurship. The trio founded Startup Tribe, a group designed to offer hands-on support for students interested in starting companies right away, not 10 years down the line.

“There’ve always been people on campus who cared about entrepreneurship,” Rosenthal said. “All we did was help put a name on it.” But Startup Tribe did more than simply amass an amorphous group of would-be Zuckerbergs.

With Bloomgarden and Rumennik, he led a campus effort to persuade HBS to launch the Minimum Viable Product Fund, a $50,000 annual appropriation for students hoping to begin businesses using the Lean Startup method, a process designed to bring new products to market as quickly as possible.

Last summer, Rosenthal landed an internship with Massive Health, a startup that is designing mobile apps and other user-friendly tools to help people track their own health. The San Francisco-based team of engineers and designers wanted Rosenthal to drop out and become their chief strategy officer.

He took the job but stayed in school. Though routine cross-country flights on a red-eye to make his 8:30 a.m. classes “weren’t fun,” he thought that his HBS education gave him an invaluable perspective on traditional industry — and, of course, more connections.

“I think plenty of my friends would say I didn’t spend enough time hanging out and playing squash,” Rosenthal said, reflecting on his time at Harvard. “But how cool is it to be able to come somewhere full of smart people, great resources, and all these opportunities, and to then be able to make something from it? I feel unbelievably lucky.”