Alumni’s lives are in her hands 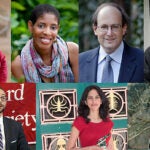 From novel scientists to novel writers

Smullyan shepherds Harvard’s stories, from the Red Books to obituaries

Deborah Smullyan shepherds the living by day, and consorts with the dead by night — or, rather, with their stories.

As a class report editor in Alumni Affairs and Development (AA&D) and the obituaries editor for Harvard Magazine (her after-hours gig), Smullyan spends a lot of time reflecting on the lives of Harvard’s alumni.

“I’m very wrapped up, every day of the week, in Harvard’s human stories,” she said.

Few things terrify most of us more than the thought of committing our lives to paper, of boiling the good, the bad, the ugly, and the transcendent down to a few paragraphs. But after editing thousands of entries for the Red Books, as the class reports are more commonly known, and writing hundreds of obituaries each year, Smullyan has come to see the comforting, even inspiring patterns in the constant parade of Harvard lives.

“I think it has made me wiser,” she said. “I will say, too, that I come away with a heightened love for this place.”

Smullyan grew up in Westchester, N.Y., and arrived in Cambridge as a Radcliffe freshman in 1968. After graduating, she took various jobs at Harvard, including copy editor of Harvard Magazine. But giving birth to the first of her two children led to a “20-year maternity leave.”

In 1993, she began editing class notes and obituaries for the magazine as a freelancer. Though she gave up the class notes, the work of obituary writing suited her. She writes about 100 obituaries of College and Graduate School of Arts and Sciences alumni for each bimonthly issue, and takes a satisfaction in each.

“Every story, once the ending is known, has a beauty,” Smullyan said. In 2007, she wrote her own mother’s obituary (Radcliffe Class of 1938), a process she described as therapeutic. “It’s almost as though she were processed in a kind of mill, coming out the other side as a calm, orderly paragraph alongside those of all the other alumni,” she said.

Smullyan joined the class report team in AA&D in 2003, taking on the hallowed duty of putting together compendia of Harvard graduates’ lives.

The Harvard Alumni Association publishes 13 reports each year, one for each class celebrating a five-year milestone, from the 5th to the 65th reunions. Their production is an impressive undertaking. Smullyan and four other full-time editors divide up the reports, and work with an appointed class officer to solicit and manage submissions from class members.

Once alumni submissions are in, the editors copy edit each entry for house style (though not, Smullyan says with a slight touch of resignation, for length) and fact check them, combing through dates, biographical details, and “just about every proper noun.”

On rare occasions, an editor will intervene — a 30-page entry will be sent back to its author for cuts, for instance. But in general, the books, which can run well over 1,000 pages for big anniversary years such as the 50th, read like group diaries, containing everything from poems to cartoons to intimate reflections.

“People are amazingly forthcoming about flaws they perceive in themselves, or the problems they or their families are having, or the sorrow of loss,” Smullyan said. “Time is a tremendous leveler.”

And the reports offer a connection that a simple Facebook friendship can’t match. “These books are an opportunity for people to sit back and think about what the last five years have meant,” she said. “That’s just not something people do on Facebook. It would be freakish.”

Editing the books herself doesn’t diminish their power as a vehicle for news, self-reflection, and good old-fashioned gossip. Every five years, Smullyan and her Radcliffe roommate Vickie Charlton set aside a day to meet up and discuss their favorite entries in their Class of 1972 Red Book.

“When you look at these books, you come to a realization of how important our classmates are to us and how important those four years were to us, and that can only be good for Harvard in the long term,” Smullyan said. “It keeps people interested and emotionally involved.”

If the office’s current assignments hold, Smullyan will likely edit her class’ 45th report in 2017.

“I was thinking: When am I going to retire? Maybe I’ll hold off until my own book passes over my desk.”