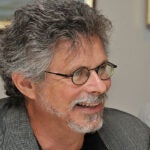 Climate scientists at the Harvard School of Engineering and Applied Sciences (SEAS) have discovered that particulate pollution in the late 20th century created a “warming hole” over the eastern United States — that is, a cold patch where the effects of global warming were temporarily obscured.

While greenhouse gases such as carbon dioxide and methane warm the Earth’s surface, tiny particles in the air can have the reverse effect on regional scales.

“What we’ve shown is that particulate pollution over the eastern United States has delayed the warming that we would expect to see from increasing greenhouse gases,” says lead author Eric Leibensperger, Ph.D. ’11, who completed the work as a Graduate School of Arts and Sciences student in applied physics at SEAS.

“For the sake of protecting human health and reducing acid rain, we’ve now cut the emissions that lead to particulate pollution,” he adds, “but these cuts have caused the greenhouse warming in this region to ramp up to match the global trend.”

At this point, most of the “catch-up” warming has already occurred.

The findings, published in the journal Atmospheric Chemistry and Physics, present a more complete picture of the processes that affect regional climate change. The work also carries significant implications for the future climate of industrial nations, like China, that have not yet implemented air quality regulations to the same extent as the United States.

Until the United States passed the Clean Air Act in 1970 and strengthened it in 1990, particulate pollution hung thick over the central and eastern states. Most of these particles in the atmosphere were made of sulfate, originating as sulfur emissions from coal-fired power plants. Compared with greenhouse gases, particulate pollution has a very short lifetime (about one week), so its distribution over the Earth is uneven.

“The primary driver of the warming hole is the aerosol pollution — these small particles,” says Leibensperger. “What they do is reflect incoming sunlight, so we see a cooling effect at the surface.”

This effect has been known for some time, but the new analysis demonstrates the strong impact that decreases in particulate pollution can have on regional climate.

The researchers found that interactions between clouds and particles amplified the cooling. Particles of pollution can act as nucleation sites for cloud droplets, which can in turn reflect even more sunlight than the particles would individually, leading to greater cooling at the surface.

The researchers’ analysis is based on a combination of two complex models of Earth systems. The pollution data comes from the GEOS-Chem model, which was first developed at Harvard and, through a series of many updates, has since become an international standard for modeling pollution over time. The climate data comes from the general circulation model developed by NASA’s Goddard Institute for Space Studies. Both models are rooted in decades’ worth of observational data.

Since the early 20th century, global mean temperatures have risen by approximately 0.8 degrees Celsius from 1906 to 2005, but in the U.S. “warming hole,” temperatures decreased by as much as 1 degree Celsius during the period 1930–1990. U.S. particulate pollution peaked in 1980 and has since been reduced by about half. By 2010 the average cooling effect over the East had fallen to just 0.3 degrees Celsius.

“Such a large fraction of the sulfate has already been removed that we don’t have much more warming coming along due to further controls on sulfur emissions in the future,” says principal investigator Daniel Jacob, the Vasco McCoy Family Professor of Atmospheric Chemistry and Environmental Engineering at SEAS.

Jacob is also a professor of Earth and planetary sciences at Harvard and a faculty associate of the Harvard University Center for the Environment.

Besides confirming that particulate pollution plays a large role in affecting U.S. regional climate, the research emphasizes the importance of accounting for the climate impacts of particulates in future air quality policies.

“Something similar could happen in China, which is just beginning to tighten up its pollution standards,” says co-author Loretta J. Mickley, a senior research fellow in atmospheric chemistry at SEAS. “China could see significant climate change due to declining levels of particulate pollutants.”

Sulfates are harmful to human health and can also cause acid rain, which damages ecosystems and erodes buildings.

“No one is suggesting that we should stop improving air quality, but it’s important to understand the consequences. Clearing the air could lead to regional warming,” Mickley says.

The research was supported by the Electric Power Research Institute (EPRI) and the Environmental Protection Agency (EPA); neither EPRI nor the EPA has officially endorsed the results. The work also benefited from resources provided by Academic Computing Services at SEAS.