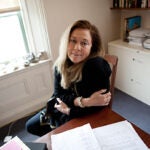 On a recent afternoon, amid the buzz of preparations for Harvard’s annual Arts First extravaganza, the man who helps pull it all together sat in his office, surrounded by posters of past undergraduate performances and mementos from previous student-run shows, and made a surprising admission.

When he was courted by Harvard 11 years ago for a leading arts position, Jack Megan left the campus after several rounds of intense interviews with a job offer, but also with a nagging hesitation.

“I remember feeling like I still really didn’t have a sense of what the Office for the Arts (OFA) at Harvard did, or what the arts were like at Harvard.”

Administrators told him to take time to think about his future and suggested he stop by Arts First. He did, and it struck him like a thunderbolt.

A stellar piano concert in the Harvard Art Museums/Fogg Museum’s sumptuous courtyard, a riveting Asian-American dance presentation in Lowell Lecture Hall, and an inspiring performance by Harvard’s Kuumba Singers in Sanders Theatre, along with other performances, hooked him cold.

“They were making art; they were doing it,” recalled Megan, director of OFA. “It was soul-lifting.”

The annual arts showcase, which is celebrating its 20th anniversary with a bonanza of art, dance, poetry, music, film, and more, will run from April 26 to 29. Saturday’s Performance Fair, with multiple acts at 30-minute intervals in a dozen venues, is a movable feast of student talent.

It all started with the dream of an alumnus who just wanted to bring a little festival to campus.

Twenty years ago John Lithgow ’67, in collaboration with Harvard’s Board of Overseers, and the OFA’s then-director Myra Mayman, decided to organize a celebration of the arts scene at Harvard. Two decades later, the event, backed by Harvard President Drew Faust’s commitment to weaving the arts into the fabric of daily life on campus, has become an annual extravaganza.

Approximately half of Harvard’s 6,600 students take part. This spring, more than 225 free events, diverse offerings including organ recitals, Irish dancing, jazz performances,  improv comedy, and pottery demonstrations, will take place at locations all around campus, with most open to the public for free.

The event will kick off with the annual Harvard Arts Medal ceremony at Sanders on April 26 at 3 p.m. This year, the award ceremony features two former Harvard student actors who will be together on stage once more. Lithgow, the annual master of ceremonies, will moderate a conversation with his former acting partner and Academy Award-winner Tommy Lee Jones ’69. The two performed in several theater productions while at the College.

Faust will award the medal.

Lithgow’s devotion to Harvard runs deep. He is forgoing a performance of his current Broadway show for the event, said Megan, who praised the actor’s lasting dedication. “He told us, ‘I have to be at Harvard.’ ”

“We thought it would be incredible to offer it at full scale in conjunction with Arts First, in the dead center of the campus,” said Megan. And that’s where it will be.

Beginning this Friday and continuing nightly from 7 to 11 p.m. through April 29, visitors to Tercentenary Theatre will be greeted by the impossibly slow movements of a host of professional dancers whose giant images will be projected on the façade of Widener Library.

“Slow Dancing” premiered at New York City’s Lincoln Center Festival in 2007. For the series of slow-motion video portraits, Michalek captured each subject’s movement (approximately 5 seconds long) with a high-speed, high-definition camera recording at 1,000 frames per second (standard film captures 30 frames per second). The result is approximately 10 minutes of extreme slow motion. If viewers watch closely, they might see Johnson at work. She was one of the 43 dancers and choreographers involved in the project.

“There are astonishing counterpoints and alignments and amazing recursive shapes that happen because of the slow motion,” said Johnson. “To be able to bring it to Harvard is such a thrill.”

“We are indebted to President Faust and Campus Services for their support in mounting ‘Slow Dancing’ here,” said Megan. It’s a great example of the spirit of collaboration that the arts are capable of generating in the Harvard community.”

Arts in the curriculum

What can dancing the tango reveal about history? How does working with clay connect to anthropology? How do the Harvard Art Museums inspire new music?

Visitors to Arts @ 29 Garden, Harvard’s new art space near the Radcliffe Quad, will find the answers to those questions on April 27, from 2 to 5 p.m. during “Breaking Boundaries: Arts, Creativity and the Harvard Curriculum.” The Quad Express Arts Shuttle will ferry people to the space every 10 minutes. Once there, visitors will encounter a range of art projects and presentations. The innovative, cross-disciplinary work is funded by the Elson Family Arts Initiative, inspired by Harvard’s 2008 Task Force on the Arts that called for greater inclusion of the arts and of art making in all disciplines.

Over the years, Arts First has expanded to include more artists and performers, more types of performances and art making, and more space for art to unfold. And it has united many members of the Harvard community and beyond around the arts.

“The community-building aspect of Arts First, that’s only gotten better over the years” said Thomas Lee, director of the OFA’s Learning From Performers program.

“It’s our annual opportunity to make a collective statement for the evolving arts and their life in this University.”