Political science, in his marrow 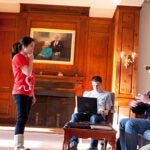 Using history as lens to explore how events occurred, what's next

Daniel Ziblatt may have been born with political science in his DNA. Even if he wasn’t, his fate was sealed to enter the field during a year abroad and a memorable night with a glass of bubbly.

The California native was fascinated as a child by tales about his grandfather, an immigrant from Eastern Europe. He spent the year after high school in southwest Germany amid an era of political upheaval and transformation. Only months before his arrival, the Berlin wall had tumbled amid celebration and shocked surprise.

Then, on Oct. 3, 1990, Germany, after decades of partition, officially reunited.

“I remember this vivid scene. Everyone came outside, and we were toasting with Champagne. It was such an amazing time, and it really got me excited about studying this part of the world,” said Ziblatt.

Later, a ride through the countryside with a friend, past villages that seemed out of the 1920s, helped to crystalize his sense that history could be a vital window to the past, present, and future. “You could see the legacies of the past were so present there, and there was so much to understand about where these places came from.”

Using history as a lens to explore future political trends has been a constant throughout Ziblatt’s career and informs his work as an author, educator, and researcher. The Harvard professor of government says he likes to delve into “major, and sometimes understudied historical puzzles that make one rethink big theories in political science.”

He did that with his 2006 book “Structuring the State: The Formation of Italy and Germany and the Puzzle of Federalism.” Ziblatt wondered how Italy and Germany, two countries that shared so many characteristics and were both forged as modern states in the 1860s, could have turned out so differently: Italy was formed as a centralized unitary state, while Germany became a federal one. His research showed that some well-developed institutional systems long in place in Germany forged the building blocks of federalism. In Italy, those systems were missing, and federalism failed.

“The answer,” he said, “led to fundamentally new paradigms for understanding how states form.”

In his forthcoming book he turns his attention again to Germany, comparing its development with Britain’s embrace of democracy. Ziblatt hopes to show how the disposition of conservative parties helps to explain why “Germany’s path of democratization was so murderous and disaster-filled, while Britain’s was relatively smooth.

“In large part, you have to look closely at authoritarian incumbents and how they cope with the process of democratization,” said Ziblatt. “If there are elements inside the regime that are willing to compete with the opposition, democratization has a chance.” People often tend to overlook such political players because they are considered the losers of the democratization process, or opponents to democracy, said Ziblatt. But they are powerful actors who often play pivotal roles in determining a country’s future.

“In a way, the conservative parties are the hinges as to whether or not democracy is stable.”

Can such political lessons be applied to the current situation in Egypt? Ziblatt thinks so. If the old-regime elites who previously served ousted leader Hosni Mubarak are able to reorganize themselves politically and agree to free and fair elections, he said, the democratization process could take hold. Only time will tell.

Ziblatt forged his path to political science around a lively dinner table that included heated conversations about politics. His grandmother was a leader in the Democratic Party in the ’50s, his father was a political scientist at Sonoma State University, and his mother and two brothers all studied political science in college.

“I was doomed from the start,” he said, laughing.

He majored in political science and German in college and received his Ph.D. from the University of California, Berkeley. Then he headed east to Harvard.

When not teaching, researching, writing, or traveling, Ziblatt spends extra time with his wife and two young daughters. In the future, he hopes to get back to his other love: music. In his office, works by Beethoven, Mozart, and Chopin sit piled in a corner. He studied the piano for years, and for a time considered a degree in music.

“There were too many interesting political things going on to spend eight hours a day playing and missing out on everything.”